Including releases from Kllo, Zeshan B, Samora Pinderhughes, and Chappell Roan 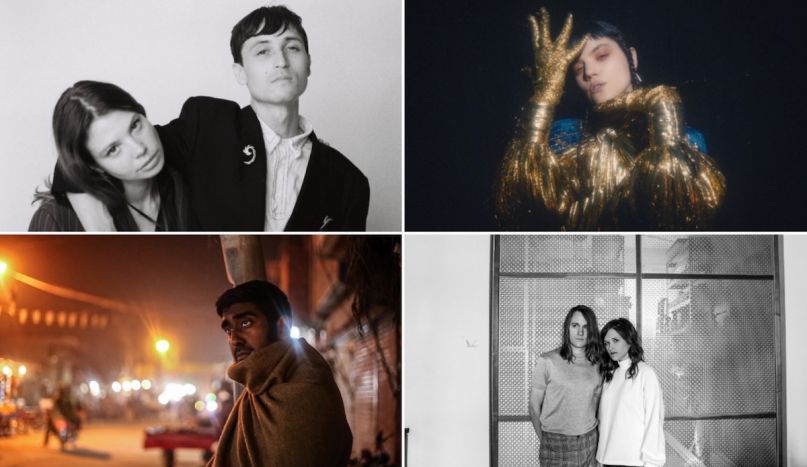 New Music Friday with Kllo, SOKO, Zeshan B, and Carrousel

Each Friday, Consequence of Sound rounds up the most compelling new music to hit our inbox. Today, April 3rd, brings fresh singles from the likes of Kllo, SOKO, Zeshan B, Samora Pinderhughes, Carrousel, Chappell Roan, and Liza Anne. Take a listen below, and keep track of all our favorite New Sounds via our exclusive Spotify Playlist.

The single began as a piano ballad, but morphed into a different beast upon the addition of ’90s rave-style drums. It’s said to be about being trapped in an emotionally suffocating relationship, and that theme is on display in Matt Sav’s directed clip. “I explored the interplay between love, obsession, imagined futures, lived pasts and the insanity that can be found in between,” said Sav.

French singer-songwriter and actress SOKO will release her third album, Feel Feelings, on June 12th. Her first record since 2015 is being previewed with a song dubbed “Are You a Magician?” It also comes paired with a video helmed by film director and screenwriter Gia Coppola, known for her film Palo Alto starring James Franco and collaborations with Carly Rae Jepsen.

“I couldn’t figure out how to get the video to reflect the song’s themes for a long time, not until Gia and I sat in my baby’s room and listened to the song a few times and came up with the whole concept while playing with Indigo’s toys,” SOKO explained in a statement. “The goal for me was to be a like a Victorian goth sailor moon princess who listens to Kate Bush a little too much.”

Zeshan B, a first-generation Indian-American and Muslim singer-songwriter, is prepping to put out his debut album of original music on May 15th. Titled Melismatic, the effort brings attention to civil rights, elitist oppression, and gender inequality.

Featuring singing in English, Urdu, and Punjabi, the record is being previewed today with “Nausheen”. “On the surface, this song probably reads as a light, airy love ballad,” the New York City-based Zeshan noted in a statement. “But it’s actually heavier than you might think – in my head, at least. It’s an ode to the intelligence, beauty and effervescence of South Asian women – who for centuries have always outshone their male counterparts.”

On April 24th, Juilliard-trained musician and activist Samora Pinderhughes will issue a new EP titled Black Spring. On the four-track collection, the frequent Common collaborator was inspired by the revolutionary energy of songwriters from the ’60s. One of the EP’s highlights is “Hold That Weight”, a timely single about how to support each other during periods of struggle.

Los Angeles indie outfit Carrousel dropped off a new album this week dubbed Magnificent Desolation. Part of one of a four-part LP project, it sees the duo of Joel and Sharon Piedt wrestling with “the fraught dystopia of life and the spiraling process of depression, both within an individual and a nation.” A standout offering from the record is the futurist pop of “Psychobabble Drama”.

“Pink Pony Club” is the new single from alt-pop artist Chappell Roan, her first since the 2017 EP School Nights. Produced by Dan Nigro (Carly Rae Jepsen), the track recounts Roan’s transformation over the years, described by a press release as a “flirty and fluid journey of self-discovery.”

“All of a sudden I realized I could truly be any way I wanted to be, and no one would bat an eye,” explained the Troye Sivan-approved songwriter. “It was so different from home, where I always had such a hard time being myself and felt like I’d be judged for being different or being creative. I just felt overwhelmed with complete love and acceptance, and from then on I started writing songs as the real me.”

Indie songwriter Liza Anne has returned with yet another new 2020 single. Following last month’s “Desire” is “Bad Vacation”, a synth-driven track about both the hurt and happiness that come from finally ditching a toxic relationship. It was co-produced by Anne herself alongside Kyle Ryan (Kacey Musgraves) and Michah Tawlks (COIN).

“It feels like a strange time to release music but an even stranger time not to,” Anne explained. “Writing this song was a mental playground for me – turning pain into satire and imaging a hope-filled world with no ceilings – I wanted to bottle up that electricity that happens when you’re free of something taxing.”