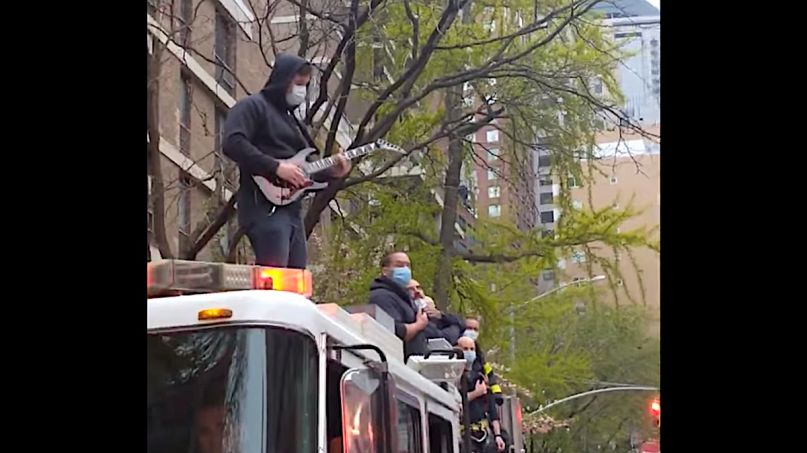 As part of New York City’s nightly salute to healthcare workers, one firefighter delivered a rocking tribute atop a fire engine in Lower Manhattan. FDNY member Louis DeRosa of Ladder 15 shredded the National Anthem on his guitar outside the NewYork-Presbyterian Hospital.

Each night, at 7:00 p.m., NYC residents and first responders have been honoring healthcare workers on the frontlines of the coronavirus pandemic by cheering and clapping from their windows and outside hospitals. On Thursday night, DeRosa went full-on Jimi Hendrix, rocking “The Star-Spangled Banner” as his fellow firefighters stood beside him on top of Ladder 15’s fire engine.

When it was over, he received a rousing ovation from bystanders, hospital workers, and fellow firefighters. Since being posted on the Uniformed Firefighters Association of Greater New York’s Facebook page, the video has racked up nearly 3 million views.

The pandemic has led to unique musical performances around the world. Last month, a dude shredded Slayer’s “Raining Blood” from a balcony while on lockdown in Italy, and more recently, a number of notable metal artists teamed up for a socially distant rendition of Steely Dan’s “Reelin’ in the Years”.

FDNY Firefighter Louis DeRosa #Ladder15 plays in honor of the #HealthcareHeroes at @nyphospital Lower Manhattan. FDNY salutes all who continue to serve in the city’s response to COVID-19. pic.twitter.com/izmC2QYuEi

Previous Story
Jim James, Will Oldham, and Over 20 Kentucky Artists Share “Lift Up Louisville”: Stream
Next Story
Bandcamp Will Waive Its Cut of Sales on the First Friday of Next 3 Months
Popular
More Stories
[fu-upload-form form_layout="media" title="Submit Your Photo"][input type="hidden" name="ugc" value="1"][/fu-upload-form]