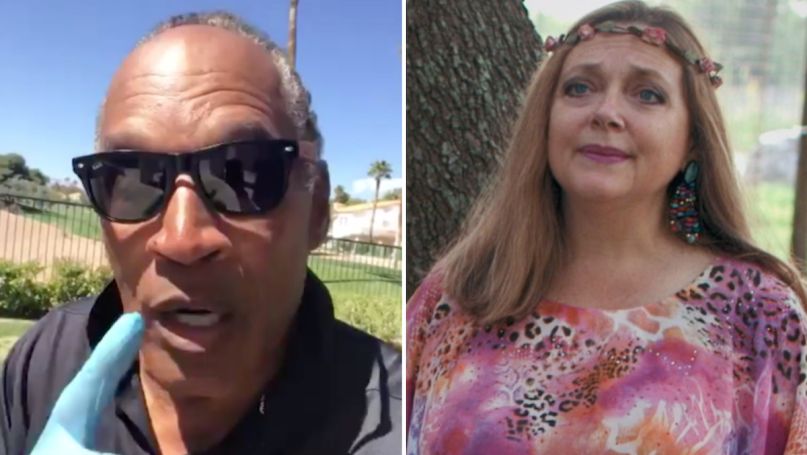 Ever since Netflix’s Tiger King became the viral true crime doc of the moment, one key player has expressed issues with the story the series tells. Carole Baskin, rival to Joe Exotic, has taken umbrage with the filmmakers “suggesting, with lies and innuendos” that she had something to do with her the disappearance of her husband in 1997. But one Tiger King fan who knows a thing or two about being accused for crimes he “didn’t” commit, O.J. Simpson, seems pretty certain she murdered the man.

In a video posted to Twitter (via TMZ) Simpson talks about how he finally caved and watched Tiger King. “White people! What’s with you and wild animals?!” he questions at one point. “Leave them animals alone!”

Then, as he points to the screen with a glove-covered finger, he proclaims, “There’s not a shred of doubt in my mind that lady’s husband is tiger sashimi right now. I’m just saying!” (Note, he actually pronounced it “sushimi,” but we’ve corrected him for clarity.)

Now, given, that glove is probably more about O.J. keeping himself safe from coronavirus than anything, but in context the optics are pretty icky. There’s just something truly unnerving about a man many believe got away with murder (but spent nearly nine years behind bars for a robbery and kidnapping conviction) laying out his opinion on another accused killer.

For those not caught up on Tiger King, Baskin’s millionaire husband, Don Lewis, disappeared in 1997. Baskin took over most of his estate after she had him legally declared dead in 2002. The Netflix docuseries does suggest a possible explanation for Lewis’ disappearance is that Baskin murdered him, ground his body a meat grinder, and fed him to her tigers. Baskin has vehemently denied such accusations.