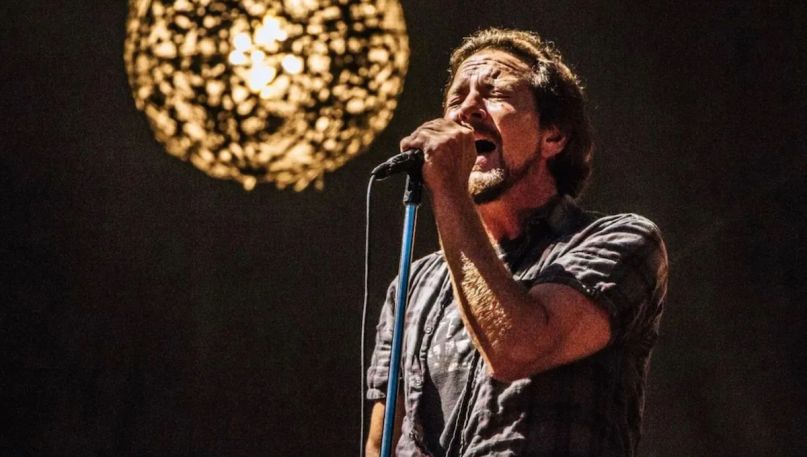 With all planned tours and music events on hold because of the the ongoing pandemic, artists have turned to livestreaming to connect with their fans. Today’s schedule is absolutely packed. Pink Floyd and Foo Fighters are streaming classic concert films, while Grateful Dead are premiering previously unseen performance footage.

Among the artists playing live sets today are The War on Drugs, (Sandy) Alex G, Joan Jett, and Amanda Shires with Jason Isbell. Plus, Post Malone is staging a Nirvana tribute concert and 100 gecs are signing onto Minecraft.

Beginning April 24th, Pearl Jam present the “Gigaton Visual Experience” for free on Apple TV in over 100 countries. The immersive release features a full playback of their latest album Gigaton. Accompanying the music are vivid visuals curated and created by Evolve, the same filmmakers who helmed “Dance of the Clairvoyants”, Pearl Jam’s first official video in seven years.

After the seven days of streaming, the release will be available for purchase and rental.

Pink Floyd continue their new YouTube concert series by streaming their classic 1972 concert film, Live at Pompeii, featuring the band performing in the historic Roman amphitheatre of Pompeii, Italy without an audience.

Foo Fighters are streaming their legendary 2006 performance at London’s Hyde Park for free on YouTube. The concert featured surprise appearances from Motörhead frontman Lemmy Kilmister and the members of Queen.

All week, Chicago’s 101 WKQX host two shows a day as part of their “Quarantine Concert” series. First up today is Nathaniel Rateliff.

La Blogothèque is offering a new spin on its beloved “Take Away Shows” with “Stay Away Shows”. As they explain it, “We want our entire community and all music lovers to have access to their favourite artists and discover new talents during the confinement period. That’s why we’re launching the ‘Stay Away Shows’. Every day, at 7:00 p.m. Paris time, 2:00 p.m. NYC time, 11:00 a.m. LA time, on our Instagram, friends from The Blogothèque will come and play a live show with a lot of surprises. Please, stay home, stay safe.”

The Killers had scheduled a live Instagram Q&A for last week, but had to reschedule because they instead performed on Lady Gaga’s One World: Together at Home Global Citizen Festival. The makeup date is scheduled for today at 3:00 p.m. EDT.

Joan Jett is the latest guest on Rolling Stone’s “In My Room” IG series. With the show presented by Gibson, Jett is also auctioning off an autographed, limited-edition Gibson Joan Jett ES 339 electric guitar (of which only 150 were made) to benefit the MusiCares COVID-19 REleief Fund. Place a bid here.

For a way to move and stay active together with your kids, tune into Kidz Bop’s “Daily Dance Break” with the Kidz Bop Kids, highlighting a different Dance Along video every day at 3:00 p.m. EDT.

Today’s performance is from Andrew Bird.

Man Man mastermind Honus Honus hosts his quirky “From Honie Pond” shower sessions every week day on Instagram live. Tune in to chat with the frontman and see who drops in for a surprise chat.

Blackberry Smoke are holding a “Pandemic Crib Jam” on Facebook.

Post Malone is throwing “Stay Home and Jam #WithMe”, a livestream concert during which he’ll perform a selection of “Nirvana hits and fan favorites.” The show benefits the United Nations Foundation’s COVID-19 Solidarity Response Fund for The World Health Organization (WHO), with Google matching donations at a 2:1 rate up to $5 million.

(Sandy) Alex G is delivering a performance on Pitchfork’s Instagram.

100 gecs are holding a virtual festival on Minecraft to benefit Feeding America. Guests include Charli XCX, Kero Kero Bonito, Cashmere Cat, A.G.G Cook, Benny Blanco, Tommy Cash, Alice Gas, and more. You’ll need to be a Minecraft player to watch, but an audio stream will be playing on 100 gecs’ website.

“Under One Roof: A Benefit for North Carolina Artists”

The War on Drugs

All week, Chicago’s 101 WKQX host two shows a day as part of their “Quarantine Concert” series. Next up today is The War on Drugs.

Lionsgate Live! A Night at the Movies

Lionsgate kicks off its new weekly series, “Lionsgate Live! A Night at the Movies”, with a free screening of Dirty Dancing, hosted by Jamie Lee Curtis.

To make the night even more of an event, Lionsgate has teamed up with Popcornopolis and SnackNation for several at-home snacking options. The latter company will be curating a movie-themed snack box with free shipping options.

New Orleans’ Queen of Bounce, Big Freedia, and her shake team perform live for fans every Friday night for the foreseeable future. “With all that’s happening right now, we need some joy and fun,” says Big Freedia. “Shakedown Fridays is a time for everyone to tune-in and shake with me and get some much-needed distraction from the news.”

Fans are encouraged to donate to the Greater New Orleans Disaster Relief Fund.

Drew Holcomb is making the most of his time in self-quarantine by creating the “Kitchen Covers” series that streams every evening at 9:00 p.m. EDT via Instagram and Facebook. So far, he’s covered songs by The Avett Brothers, Tom Petty, U2, and Kenny Rogers.

In lieu of his planned tour, Porches are streaming live from Instagram every night he was supposed to have a gig.

For the duration of social distancing/quarantine practices in the U.S., Diplo will livestream DJ sets from his house five nights per week. The streams will be themed in line with Diplo’s interests: “A Very Lazer Sunday”, paying homage to his group, Major Lazer’s, dancehall and reggae roots airing Sundays at 7:00 p.m. EDT; a mixed-bag “Ronatronix” set Tuesdays at 10:00 p.m. EDT (the name a throwback to the iconic Hollertronix parties that launched his career); country-flecked variety show “The Thomas Wesley Show Thursdays” at 10:00 p.m. EDT; ambient “Corona Sabbath Fridays” at 10:00 p.m. EDT; and a good, old fashioned “Coronight Fever” rave Saturday nights at 11:00 p.m. EDT.

Major publishers and record labels will allow the archived streams to live on YouTube and to be monetized by respective rights holders, with royalties being paid to all those whose music is played in the shows.

Each evening at 10:15 p.m. EDT, Jeff Tweedy and his family perform on their @stuffinourhouse Instagram page.

In a series he’s calling “Musical Everydays,” Rufus Wainwright is performing one song from his catalog everyday on piano. Early installments have seen him play “Grey Gardens”, “The Art Teacher”, and “Vibrate”.

“In these dire times, I want to share some music with you all from the warmth and comfort of our home in Los Angeles. Hopefully you’re at your homes with your loved ones as well. We have to stay positive and I feel that music and art are a large part of what gets us through times like these. It’s even more essential to be reminded about what it really means to be human: compassionate, caring, creative,” Wainwright says.