"Technically I'm not a doctor, but motherfuckers listen when I read a poem" 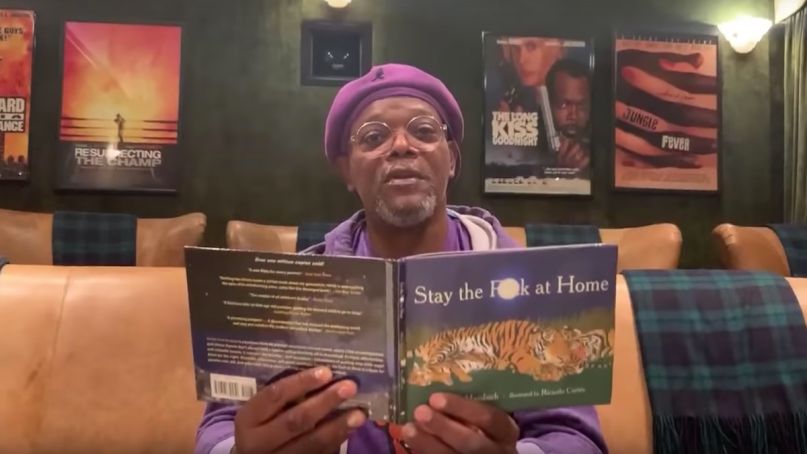 Samuel L. Jackson is the one celebrity you should always listen to. Should you eat that burger? Where are you (are you here)? And where’s that super suit again? Jackson knows all the answers. Nearly a decade ago, he helped kids get some z’s with his audiobook Go the Fuck to Sleep. Now, he’s back to read a timely bedtime story for the coronavirus pandemic: Stay the Fuck at Home.

Last night, Jackson video conferenced in to Jimmy Kimmel Live! as a special guest. He came prepared to lift people’s spirits — dressed in a purple hat, matching hoodie, and a t-shirt with a cartoon rendition of himself in that very outfit — from the comfort of his guest house’s screening room. Kimmel and Jackson caught up about their voided vacation plans, the Netflix series Tiger King, and what they’ve been up to now that most everyone in the US has been advised to self-quarantine.

Jackson then revealed he’s working on “a sequel” that’s been highly requested: Stay the Fuck at Home. Written by Adam Mansbach, who penned the original viral children’s book Go the Fuck to Sleep, this new poem features a familiar refrain from these past few weeks: stay home and flatten the curve. Of course, it’s more colorful than that thanks to Jackson’s soothing Alexa voice.

There’s too many great lines to list, but a favorite is the one Jackson arguably delivers with the most pizazz: “Now technically, I’m not a doctor/ But motherfuckers listen when I read a poem/ So here I am, Samuel motherfucking Jackson/ Imploring you to keep your ass at home.” Top that, Dolly Parton. Watch the entire clip below (and peep his great film posters in the background, too).

If everyone heeds Jackson’s advice and holes up in their houses, then there’s a chance we may get to see his newest film, Spiral: From the Book of Saw, in theaters as originally planned. He and Chris Rock star in the latest installment of the Saw franchise, which is one of the most anticipated horror movies of the year.

If Jackson doesn’t put you to sleep with his latest reading, then consider keeping yourself entertained while quarantined with our updated selection of things to watch during the coronavirus pandemic.