R.E.M.’s Michael Stipe Arrives in the Nick of Time With “No Time for Love Like Now” 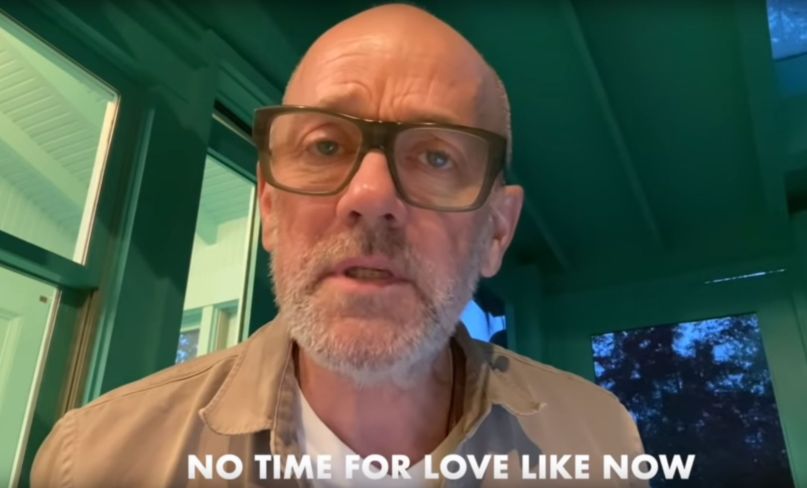 Voices of hope and comfort are rare these days. So, this past weekend, which marked much of America’s first full week of lockdown, was thankfully brightened by a familiar voice that we haven’t heard from much in recent years. On Saturday, R.E.M.’s inimitable frontman, Michael Stipe, gifted fans with a no-frills demo of “No Time for Love Like Now”, a brand-new track written with Aaron Dessner of The National, according to the note accompanying the release. R.E.M. have been in the news again lately. The band surprisingly entered the iTunes singles charts two weeks ago with their 1987 high-speed word collage “It’s the End of the World as We Know It (And I Feel Fine)” as fear of Covid-19 spread. And, on a brighter note, they will celebrate the 40th anniversary of their first show as a band this coming Sunday. (And so will we, with features like our countdown of their Top 10 Concerts.) Otherwise, Stipe has let out barely a murmur since the group amicably called it quits back in 2011. A PSA on virus safety and two recent singles being the rare breaks in radio silence.

Absence, it turns out, has definitely made our hearts grow fonder of Stipe and all his voice and music represent. After all, this is the same singer who urged us to “hang on,” “take comfort in [our] friends,” and know that “[we’re] not alone” in one of R.E.M.’s most noteworthy ballads, “Everybody Hurts”. The video accompanying “No Time for Love Like Now” itself feels soothing in a simple way. Stipe sings to the track inside, presumably, an enclosed porch of sorts, the lingering daylight outdoors content to fade as a delicate light from the house behind the singer emanates softly. Stipe, himself, looks the same as we remember him, bald with a thin patch of gray on his chin and face, but now with a pair of brown, thick-rimmed glasses through which we rarely see his eyes open as he sings. It’s as if a favorite uncle is singing for us … never mind that avuncular figure happens to be one of the greatest frontmen in rock and roll history.

The song itself might be the most promising of the three singles we’ve heard thus far from Stipe. While “Your Capricious Soul” finds the singer bouncing his voice against a steady caravan of passing sounds and “Drive to the Ocean” spins more like a prophetic, offbeat march towards the seaside, “No Time for Love Like Now” hits the ear with less experimentation and opacity and more candid urgency. “Where did this all begin to change?” wonders Stipe atop a soft beat, cataloging what there is no time for and nudging love up to the front of the line ahead of them. He concludes, “Whatever waiting means in this new place/ I am waiting for you.” In a world that looks and feels incredibly different than it did two weeks ago, we’ll gladly accept his promise.

For Fans Of: Not necessarily R.E.M. While Stipe’s voice remains dynamic and familiar, he’s very much finding his footing and following his own beat alongside new collaborators like Dessner. Like R.E.M. had to figure out what the band might be on Up without Bill Berry, Stipe’s seeking out what colors to paint with without that usual R.E.M. palette of Peter Buck’s jangly guitars and Mike Mills’ unmatchable harmonies. So far, it’s promising.

Best Moment: It’s a song whose most beautiful moments are as subtle as the smile Stipe ends the video with. A slight vocal turn into the question “Where did this all begin to change?” or the soft-spoken, but granite insistence in the refrain of “I am waiting for you” are the ingredients that make a simple song like this one stand up, at least somewhat favorably, alongside Stipe’s R.E.M. fare.

Where to Go From Here: Hopefully towards Stipe’s first-ever solo album. That’s the plan, right? Am I right? I’m right, right?