The two late night giants interview each other from quarantine 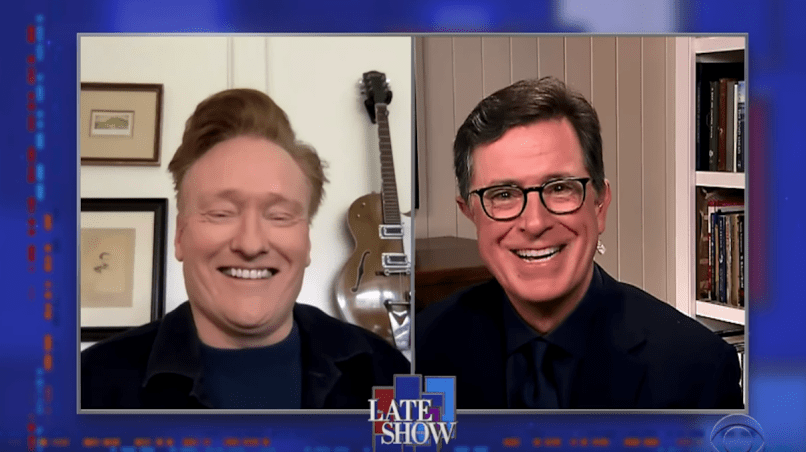 Entering week four (??) of isolation, and we’re all starting to turn in on ourselves a little. Late night television isn’t immune, as evident from last night’s episodes of Conan and The Late Show with Stephen Colbert, where Conan O’Brien and Colbert actually interviewed each other. Both shows aired the exact same interview, but packaged in slightly different ways.

Conducted in the uber-casual style of most video chat-based talk show interviews these days, the two hosts joked about how even their mundane banter would be worthy of airing in these strange times. They also compared notes on how they’re filming from home, with Conan expressing his jealousy of Colbert’s top-of-the-line equipment. Even so, they both admitted to missing their studio audiences, with Colbert quipping, “Because I get all of my value from their praise. I have no self-worth at all. I only exist, really, in reflection to them chanting my name.”

At one point, they took a look around their respective rooms, showing off little pieces of ephemera and hidden supplies of liquor. Colbert pulled out a photo of his father framed with his army dog tags, explaining that his dad worked as an immunologist at the National Institutes of Health. “He was basically Anthony Fauci,” he said. It turns out Colbert’s dad actually went to the same college as Fauci, Holy Cross, and O’Brien surprised his fellow host by revealing his dad graduated from there too. Not only that, O’Brien’s father is a microbiologist specializing in infection diseases. So you have to wonder what late night program Fauci’s kid is going to host in the future.

(In a bonus clip, Colbert also told Conan about the time he randomly met another Holy Cross alum named Bones Hamilton. The man invited Colbert into his home and gave him his father’s page from the school year book.)

Elsewhere, Colbert randomly opened up about his new beef with Bob Dylan. Apparently, one of the Late Show writers had written a great “Subterranean Homesick Blues” parody about the coronavirus, but Dylan was adamant it not be used, under threat of lawsuit. “I just don’t think that’s nice,” said Colbert. “How old is that song? He’s gotten all the juice he’s gonna get out of that old stone. Let the rest of us have a crack at it.” He even read Conan some of the lyrics, but it was bleeped out under advice from CBS’ legal department.

The pair also talked about dealing with family while isolating, plans for Conan’s birthday (April 18th), and more. Watch it all unfold below.