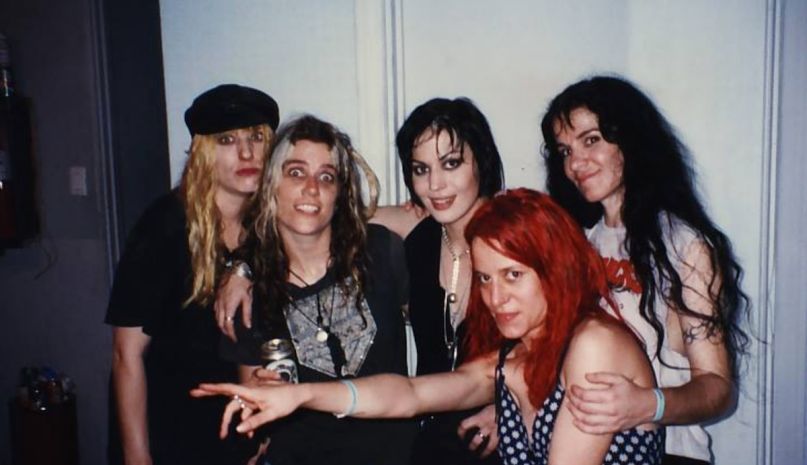 L7 have released a new cover of the 1983 Joan Jett classic “Fake Friends” — and it features Jett herself on guitar and vocals. Stream this updated version below.

“To have Joan’s vocals on this track along with mine is super surreal and cool,” L7’s Donita Sparks said of the collaboration in a statement. “Our band has experienced many fake friends, especially when you’re down. Some of these people you thought were your friends are nowhere to be found. Your phone calls aren’t returned, etc. It’s painful and it sucks. Then you find out who your true friends are.”

The “Fake Friends” cover is out today alongside “Witchy Burn”, a “swampy” alternate rendition of L7’s “Burn Baby” track from 2019. According to a statement, the two-song single was originally supposed to be released to promote their tours in New Zealand and Australia — that is, until the pandemic forced them to scrap those dates.

“When the tour got cancelled due to this horrible virus, we decided to release the tracks as a way to keep our fans’ spirits up a bit, as well as our own,” Sparks explained. “New material gets everyone excited and happy and maybe gets them dancing around their cribs. That’s something positive the band can do for our fans in these uncertain times. When rock n’ roll duty calls, L7 answers.”

L7 and Jett have been longtime friends and colleagues. Last year, L7 finally joined Jett’s Blackheart Records family with the release of Scatter the Rats, the grunge band’s first album in 20 years.

In other L7 news, Sparks has launched “The Hi-Low Show with Donita Sparks”, a weekly variety show on the “We are Hear: On the Hair” streaming network. Broadcasting every Friday at 3 p.m. ET, it promises music and art performances from guests like Lydia Lunch, The Jesus Lizard’s David Yow, Dani Miller, Le Butcherettes’ Teri Gender Bender, and Starcrawler’s Arrow de Wilde.

Revisit L7’s appearance on Kyle Meredith With… from last year: