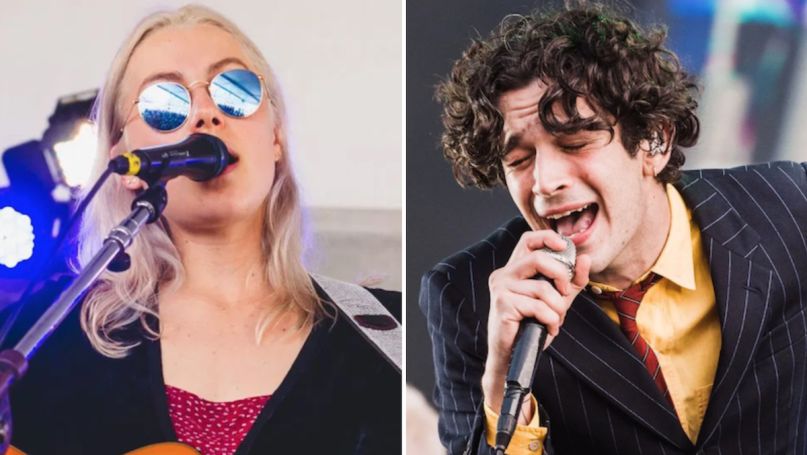 Phoebe Bridgers and The 1975, photos by Ben kaye

Earlier this week, The 1975 delayed their forthcoming album, Notes on a Conditional Form for a second time. As a consolation, they promised to release a new single from the follow-up to last year’s A Brief Inquiry into Online Relationships at the end of the week. Well, here we are on Friday, and The 1975 have followed through with “Jesus Christ 2005 God Bless America”, which features the additional surprise of Phoebe Bridgers.

Each song thus far off Notes has been markedly different, from the throwback “Me & You Together Song” to the dreamy folk of “The Birthday Party” to the crunchy ’90s screamer that is “People”. “Jesus Christ 2005”, which the band has previously played during live sessions, takes another turn, this time towards the vulnerable.

A crushing acoustic number, the track wallows in the dissonance between faith and love. “I’m in love, but I’m feeling low/ For I am just a footprint in the snow,” Matty Healy sings with Bridgers. “I’m in love with a boy I know/ But that’s a feeling I can never show.” Bridgers also gets a heartbroken verse all her own. Take a listen below.

Originally slated for February 21st before being pushed to April 24th, Notes on a Conditional Form is now expected on May 22nd. The 1975 are hoping the pandemic has taken a turn for the better ahead of their summer tour dates, tickets for which you can get here.