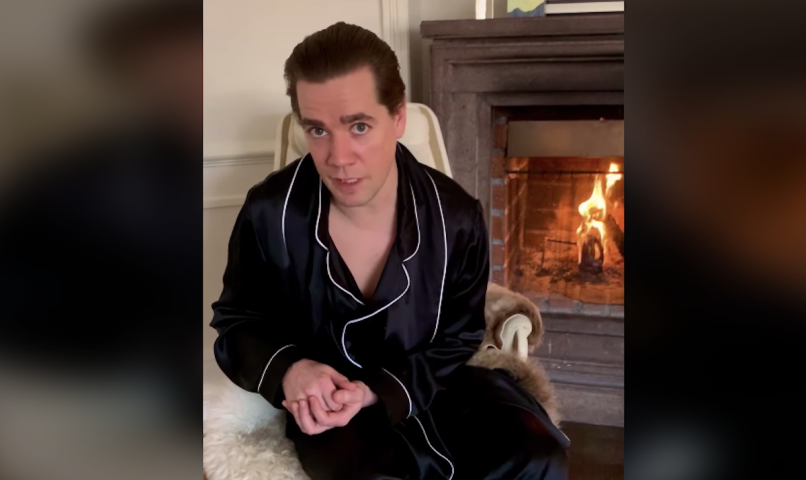 The Hives‘ frontman Pelle Almqvist has shared that he is “feeling slightly better” after contracting what he believes to be the COVID-19 coronavirus strain. While he and the rest of the world try to get past the virus, The Hives will be sharing previously-unreleased live concert footage as part of the new “Hivemanor Livemanor” series. First up is a mostly-covers performance from 2009 featuring songs by The Rolling Stones, Misfits, Billie Holiday, and more.

Almqvist announced “Hivemanor Livemanor” in a Facebook post. Seated in front of a fireplace and dressed in black silk pajamas, he explained that he was “in the last stages of the infection.”

“Well hello there Hives fans in coronatine quarantine worldwide. This is Howlin’ Pelle Almqvist, currently myself in the last stages of the infection and feeling slightly better. Seeing as shows are getting postponed and cancelled worldwide, we thought we’d bring you the next best thing: broadcast into the comfort of your very own home, the Hivemanor Livemanor concert series, where we give you shows we’ve done in the past since we can’t do any currently.”

The first entry in the “Hivemanor Livemanor” series comes from a January 2009 show at The Metro Theatre in Sydney, Australia. In the concert, the Swedish punks wasted no time launching into a furious cover of the old doo-wop favorite “Born to Cry” by Dion and the Belmonts. In addition to Billie Holiday, Misfits, and The Rolling Stones, The Hives covered songs by Aussie outfit The Saints, Swedish garage rockers The Hellacopters, and more, before closing with their own cut from The Black and White Album, “Tick Tick Boom”. Scroll onwards for a set list, and check out the full performance below.

The Hives dropped their last album, Lex Hives, back in 2012. They made a comeback last summer with their first physical release in seven years, a single with Jack White’s Third Man Records. The A-side featured “I’m Alive” while “Good Samaritan” occupied the flip side. The Hives have a few performances on the calendar that haven’t yet been cancelled over COVID-19, and you can get tickets here.

Hello Hives Fans in varying stages of Coronatine Quarantine worldwide. Welcome to The Hivemanor Livemanor. This is Howlin’ Pelle of The Hives. I am at the end of week one of what I think is Covid-19 infection. Feeling slightly better. Like us, a lot of you are now home with extra time on your hands. And since shows are being postponed or cancelled – like us, you may be missing the live rock show experience. Luckily, we have quite a few shows saved in the vault! We will start releasing them here on the worldwide web for free so you have something to watch while in Coronatine. I suggest using large speakers and turning up so you can slam dance around your home, and thereby get your daily exercise, but headphones work too. Please no tiny computer speakers. First up is a show we did some years ago in Australia. It’s an all covers show so it will feature a bunch of shit you have never heard us play, and that we have not played at any other shows. Super exclusive shit indeed. Unless you were there, which statistically most of you could not have been. It was in Sydney at the Metro Theatre. I watched it afterwards and gave myself goosebumps. Hope you get some too. We will be reporting back soon with another show. I think it will be a French one from The Black and White Album tour. Love you all.  Stay in, stay well, and wash your hands. The Hives HIVEMANOR LIVEMANOR: Metro Theatre in Sydney, AUS – 5 January 2009 Covers show made possible by our friends at @vice and @moshcam_pics 1. Born to Cry (Dion and The Belmonts cover) 2. Early Morning Wake Up Call (Flash and the Pan cover) 3. Nasty Secretary (Joy Rider and Avis Davis cover) 4. Hollywood Babylon (Misfits cover) 5. Beast of Burden (The Rolling Stones cover) 6. Lost and Found (The Saints cover) 7. Little Lil (Mel Dorsey cover) 8. Stormy Weather (Billie Holiday cover)  9. (Gotta Get Some Action) Now! (The Hellacopters cover) 10. Stop and Think It Over (Compulsive Gamblers cover)  11. Tick Tick Boom #thehives #hivemanorlivemanor #thehivesaustralia #coronatine #stayhome