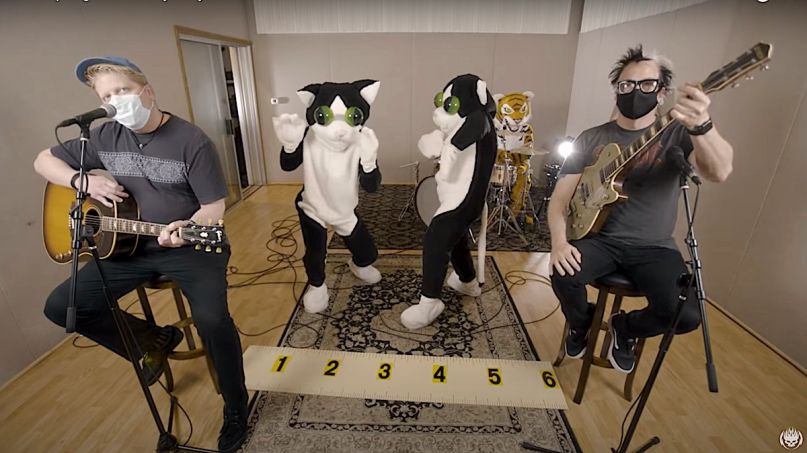 The Offspring are the latest band to tackle one of the memorable songs from Netflix’s wildly popular Tiger King documentary series. The punk-rock veterans have delivered a quarantine cover of the notorious track “Here Kitty Kitty”.

As seen in the documentary, central figure Joe Exotic “performs” the song “Here Kitty Kitty” as a takedown of his rival Carole Baskin. It’s accompanied by a music video that shows a Baskin look-alike engaging in sordid activities.

For their cover, The Offspring up the tempo a bit, giving the country tune more of a rock vibe. In their own video, frontman Dexter Holland and guitarist Noodles perform the song with face masks on, while their drummer (maybe Offspring stickman Pete Parada?) sports a full tiger suit.

In a description on YouTube, The Offspring make sure to credit the actual artist who originally performed the track (as it has come to light that Joe Exotic merely lip-synced his songs), while also alluding to Exotic’s accusations about Baskin in the film:

“Hey, Guys! Like many of you, we are going a little stir crazy these days and we wanted to do something fun to put a smile on our faces, and hopefully on some of yours too. This song, Here Kitty Kitty, was originally by the Clinton Johnson band, and *not* by anyone in that recent documentary we all got caught up in.

The Offspring wives were group texting recently, and while they all agreed that they truly love their husbands, there are times when they’ve absolutely felt like feeding us to the tigers. In that spirit, we hope you enjoy this random song & video.”

Prior to the pandemic, The Offspring were finishing up work on their 10th studio album. As of now, no further details regarding the album have been announced.

Watch The Offspring take on “Here Kitty Kitty” in the video below.