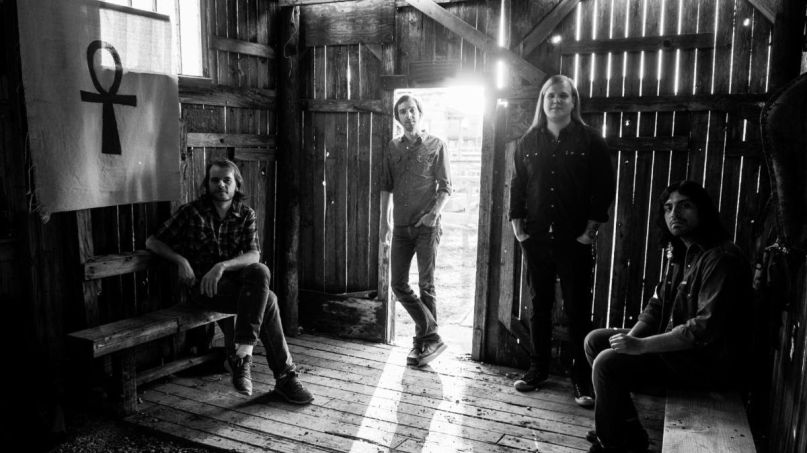 Austin heavy rockers The Sword have been on hiatus for two years. The band took a break following a prolific string of releases and tours, an era its tapped into for two career-spanning compilations, Conquest of Kingdoms and Chronology 2006-2018, out on June 5th.

Conquest of Kingdoms is a 3-LP vinyl collection of previously unreleased live tracks, B-sides, covers, and rarities. Chronology 2006-2018 is a 3-CD compendium that includes the band’s greatest-hits and fan favorites, and also includes some of the rarities featured on Conquest of Kingdoms.

“We’ve got all these exclusive 7-inches and a split record or two, that were pressed in 1,000 quantities — maybe people heard those tracks on a YouTube stream in not really the greatest quality,” bassist Brian Richie said in a press release. “As the band had gone on hiatus, we had this wealth of material to share including live sets — things that were sitting on my hard drive for years, things that were given to me at shows. It seemed like the right time.”

The cover selections are particularly notable, with The Sword honoring many of the heavy psych and proto-metal bands that came before them. Some of the notable covers on Conquest of Kingdoms include Pentagram’s “Forever My Queen”, KISS’ “She”, Led Zeppelin’s “Immigrant Song”, and more.

Longtime fans will recognize highlight tracks from the band’s studio output on Chronology 2006 – 2018, including the instant classic “Freya”, “Cloak of Feathers”, and “The Warp Riders”, among others.

“The CD release [Chronology 2006-2018] will be more of a career retrospective with selections from each of our albums as well as the rarities and B-sides and things,” singer/guitarist John D. Cronise said of the methodology of the separate compilation. “Sort of a mini box set, you could say. The set will include a booklet with essays and photos, to make it special and extra. Whereas the LP release [Conquest of Kingdoms] is more streamlined, with just the B-side and rarities material. Personally for me, that’s what’s exciting about the releases. A lot of that stuff I never thought would see the light of day but I always thought was really cool and was proud of.”

The Sword are scheduled to emerge from hiatus for a string of shows this summer — “virus permitting,” according to Richie —  some headlining and some supporting Primus’ tour covering Rush’s Farewell to Kings. See those dates below, and get tickets here.

Listen to a live version of “Freya” recorded in 2011 at Stubb’s in Austin below. Pre-order the compilations via Craft Recordings.