It's what the Internet demanded... 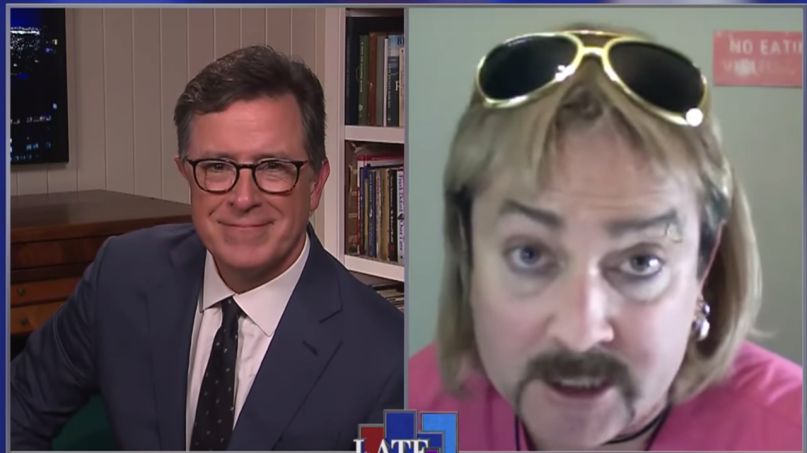 Reno 911 star Thomas Lennon fulfilled everyone’s quarantine dreams Thursday night on Late Show With Stephen Colbert by debuting his impersonation of Netflix’s Tiger King nutbar Joe Exotic. For added effect, he even made it appear as if he was calling in via satellite from jail, where the real Exotic is currently serving a 22-year sentence for 17 federal charges of animal abuse and two counts of murder for hire. Cool guy.

As you’ll see below, Lennon is a total shoe-in for Exotic, confirming what the Internet has been saying for weeks now. Clearly amused, Colbert had some fun playing up the bit, asking Lennon’s Exotic if he’s seen the docu-series, to which he responded: “There has been a lot of funky rhubarb picked in the Ted Sarandos patch, and some of it paints me to look like a chicken-fried freakazoid who is crazier than Downtown Encyclopedia Brown.”

Lennon kept going, “Well let me tell you this: That is just a colonel’s 12-piece bucket of deep-fried bologna bites, OK? I am actually a very down-to-earth, pistol-packing, double-husband-having mullet man, joie de vivre and a love of America’s cigarettes.”

It’s a pretty great bit, considering the low production value, and Lennon gives it his all he’s wont to do. Here’s hoping he carries this on ahead of his return to Reno, Nevada for Quibi’s forthcoming reboot of Reno 9/11. After all, we’d love to see him perform “Here Kitty Kitty” or even come up with his own Exotic Tiger folk tunes. Lots of potential with this one.