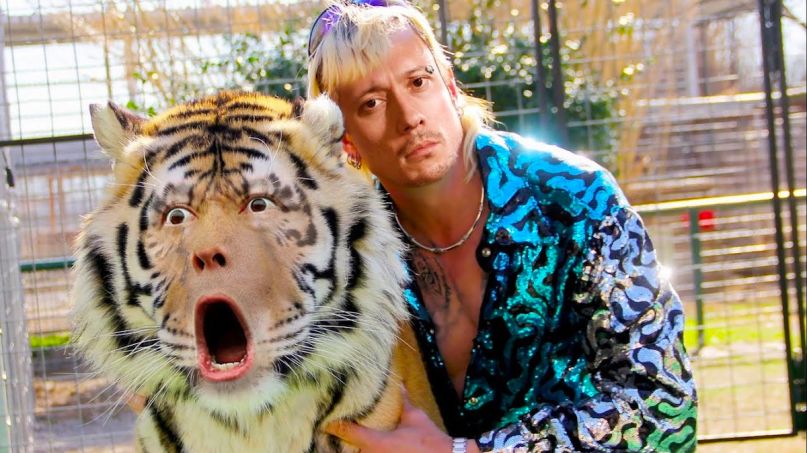 One of the best aspects of Netflix’s popular documentary series Tiger King: Murder, Mayhem and Madness is the ridiculous country songs “performed” by central figure Joe Exotic. Now, a couple of metal acts are tackling two of the most memorable tunes.

Those who have watched the series know that zookeeper Joe Exotic stars in some ludicrously entertaining music videos in which he “sings” about his love of big cats (“I Saw a Tiger”) and calls out his arch rival Carole Baskin (“Here Kitty Kitty”). While it has since been revealed that Exotic didn’t actually sing the songs themselves, they’re still proving to be modern-day classics.

Now the inevitable cover versions are coming in, including two from the metal world. In one, Trivium frontman Matt Heafy tackles Joe Exotic’s anthem “I Saw a Tiger”, eschewing his usual metal vocals for a fairly faithful rendition of the song.

In a studio with his acoustic guitar, Heafy delivers lines like, “Tell all the hunters to lay down their guns/ Tell ’em that the tiger needs a little bit of love/ Let ’em run the jungle, let ’em roam their land/ Then stand back and marvel, what a beautiful cat.”

As of now, Trivium will be on tour this summer and fall with Megadeth and Lamb of God, with tickets available here.

Meanwhile, the metalcore band Everyone Dies in Utah puts a new spin on “Here Kitty Kitty”, complete with brutal verses, heavy guitars, and a melodic chorus. Check out both covers below.