Twin Peaks and The Black Lodge’s Influence on Cosmic Horror 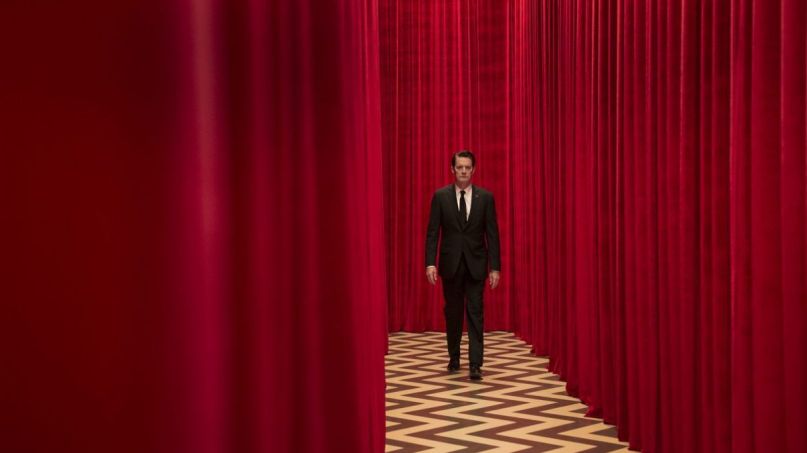 From the Double R Diner to the Roadhouse and One Eyed Jacks, the various locales of Twin Peaks offer something memorable for viewers. Twin Peaks as a whole exudes an ethereal air; there is something deeper to the pies and the damn-fine coffee. Much of Twin Peaks’ intrigue lends itself to the mystique of these settings and the surreal, provocative vibes they present. But there is one place that hides within Twin Peaks that no mortal can simply enter. One realm designated to the spiritually inclined or those seeking pure darkness: the Black Lodge.

In design, the Black Lodge is constructed of numerous hallways and rooms with sparse furniture, its colors evoking a static tension. Those hallways lead on and on, luring the unlucky occupants deeper into a cosmic maelstrom of insanity. In Twin Peaks lore, the Black Lodge is said to be a place of evil. The lodge reflects one’s darkness upon them; it takes abstract mystery and presents it through song, dance, and coded language. There is such little rhyme or reason as to how the Black Lodge exists or why its inhabitants act the way they do.

For as much as Twin Peaks itself has become a pop-culture cornerstone in the 30 years since its debut, the Black Lodge has made just as powerful an impact on cosmic horror.

When we tend to think of cosmic horror, our minds immediately associate the term with the work of H.P. Lovecraft — gigantic gods with tentacles. We also think of madness, of knowledge beyond mortal comprehension. And though it may be lacking in tentacles, the Black Lodge is the type of realm that elicits feelings of Lovecraft’s work. The lodge presents a horror that is both grand and intimate; it reaches as high as the cosmos in regards to its spiritual intrigue, yet it also looks to capture the minds of those who roam its corridors. In other words, it is a “dark world” that exists purely as a part of the universe while also acting to warp and torture those who inhabit it.

It is both this reflective quality and dark world component that have since influenced various works of pop-culture horror. Look no further than 2018’s The Haunting of Hill House and, specifically, that of the Red Room. In the show, the Red Room exists as a pocket space outside of that reality; depending on the individual who enters said room, it creates a world unique to their thoughts and feelings. Much like how Agent Cooper must navigate the darkness of the Black Lodge, the Crain family of Hill House must work through their own brand of darkness to find light in the Red Room. Though the Red Room may not embrace as much evil as the likes of the Black Lodge, both pull from a cosmic, unknown power. There is no clear understanding as to why the Red Room exists — it just does.

The Haunting of Hill House (Netflix)

Another example of the Lodge’s influence on horror is the iconic Silent Hill video game franchise — specifically the second entry. Whereas the first game embraced a supernatural spin on the town’s transformation, Silent Hill 2 decided to take on a more intimate, psychological approach. As the player makes their way through the story, a horrifying revelation comes upon them; the rotten, erosive environment around them and the demonic enemies that look to cause them harm are all a result of the protagonist’s mind.

The game’s protagonist, James, has suffered a great tragedy; because of his mixed feelings of hurt and guilt, when he arrives to the forsaken town, it warps itself around his emotions. In letting go of the established lore in the first Silent Hill, the second entry offers a greater sense of chilling mystery as to how all of the events that play out are possible. It’s as if James has entered a pathway into a personal nightmare. The town uses its cosmic power to have James face what he has done in the past — to literally confront his demons. We see something like this in how Agent Cooper crosses paths with his evil doppelgänger or in the chilling persona of the Laura Palmer that lives within the Black Lodge.

The Black Lodge representing a realm of pure darkness has always been an intriguing aspect to it. Throughout pop culture, creators have played around with light and dark worlds — realms of joy and corruption. With this in mind, though it may not be as “cosmic” as the Black Lodge, there are interesting parallels of horror at work in Jordan Peele’s Us. In the director’s second film, audiences come to discover that there is a world that exists underneath our day-to day-humanity, a shadow world where duplicates of ourselves play out remnants of our personal lives. The world of the Tethered resembles the reflective nature of humanity similar to that of the Black Lodge — there are two sides of us. Though Peele’s story is a fantastical narrative that blends realistic components, its essence comes across as uncanny, surreal, and supernatural.

Like the many questions that the Black Lodge stirs up, the Tethered also present their own philosophical questions. Whereas Us asks the viewer to consider identity and actions within our society, Twin Peaks utilizes the Black Lodge to muse existence within society, as well as the greater sense of things. Even as it approaches its brand of horror in a fashion more typical of the genre, Us uses its philosophical concepts to emphasize a form of tension just like the lodge.

On top of its haunting existentialism, the Black Lodge is a pretty nifty, if not unnerving, setting in appearance. Along with the properties that have pulled inspiration from the lodge, there are also those who have paid homage to its aesthetic choices. The Persona game franchise contains a surreal realm that blurs the line between mental and cosmic; in particular, the recent Persona 5 involves a jail-like space that embraces the many atmospheric qualities of the Black Lodge.

When it comes to more on-the-nose nods, however, the anime Soul Eater involves a unique mental space adorned with red curtains and a red-and-black floor paneling design (see where this is going). The design of the Black Lodge is meant to disturb — its surreal “simplicity” establishes a bizarre appearance. Meant to mesmerize in its use of color, the Black Lodge guides the individual into darkness before swallowing them up.

A great work of horror will find a way to connect with the individual, hitting upon something personal to them (whether it is something they relate to in society or within themselves). The Black Lodge not only makes for an intriguing realm of darkness and visual chills, but it’s also a space that stirs discomfort in the form of philosophical grandiosity.

We tend to fear what we do not understand — a sentiment that has worked its way through many tales of horror. Pocket universes and dark worlds have been around for years, but what the Black Lodge did for cosmic horror is unlike any other. We’ve seen properties time and time again pay tribute to the works of Lovecraft, but few that challenge us to think like that of the lodge. We have a 101 one stories that throw tentacle creatures and other horror tropes in our faces; but then we’ll get a story like Silent Hill, Us, or The Haunting of Hill House that show us something beyond our understanding, and we find ourselves unnerved.

This is the legacy of the Black Lodge. In its world of evil, you will find no meaning. You will discover the parts of you that you never wished to uncover. You will roam its halls again and again searching for a way out, only to discover there is no hope. The lodge is home to the cruelty and madness of existence. Among the canon to cosmic horror, the Black Lodge represents a place of infinite mystery and darkness.