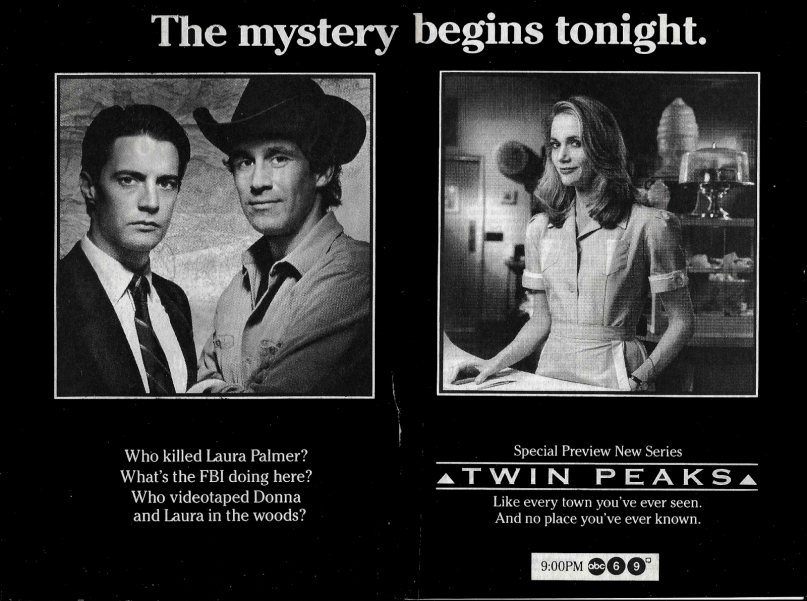 If the owls didn’t clue you in, Twin Peaks turns 30 today. Already, several fans are celebrating with donuts, pie, coffee, and possibly even creamed corn. (Stay away from those folks.) However, CORonTV may have them all beat.

In celebration of David Lynch and Mark Frost’s iconic series, CORonTV is hosting a marathon on their Twitch channel, chock full of “rare” Peaks-related content. Among the gems, however, is a stream of the pilot exactly as it premiered on ABC on April 8th, 1990, complete with all the vintage commercials to make you feel both nostalgic and old.

The festivities begin at 5:00 p.m. EST with the pilot airing at 8 p.m. EST., giving everyone a chance to either a.) plow through their work day without distractions or b.) also take part in Kyle MacLachlan’s live watch party that begins at 2:30 p.m. EST. It also should give everyone enough time to sort out their baked goods. Win-win.

At the very least, though, the stream will remind everyone how batshit crazy it really was that ABC aired Twin Peaks. You know, the same network owned by the Mouse House and best known for delivering family fare such as Full House, Home Improvement, Step by Step, Growing Pains, and the list goes on. That should sink in big time tonight.

In the meantime, walk and talk backwards through our array of Peaks-related content, from Mike Pementel’s newly-minted essay on The Black Lodge to our dissection of the townspeople, to our interviews with Dean Hurley, Lykke Li, and Johnny Jewel, to our breakdown on why Lynch was so obsessed with the diner. It’s all there.

If you do end up heading to Twitch later on, be sure to stop by our recently launched channel. While we won’t be heading to the Pacific Northwest, we will be airing weekly shows, including our ranking series Tier Drop, our weekly movie program COVID-EODROME, and our weekend watch parties with The Losers’ Club, Halloweenies, and The Horror Virgin.

Starting at 5PM EDT this Weds (4/8/20), https://t.co/Fu5wjehV0K will be showing a marathon of rare #twinpeaks content, culminating at 8PM with the ORIGINAL 4/8/90 BROADCAST of the pilot including COMMERCIAL BREAKS. Watch it as if for the first time!