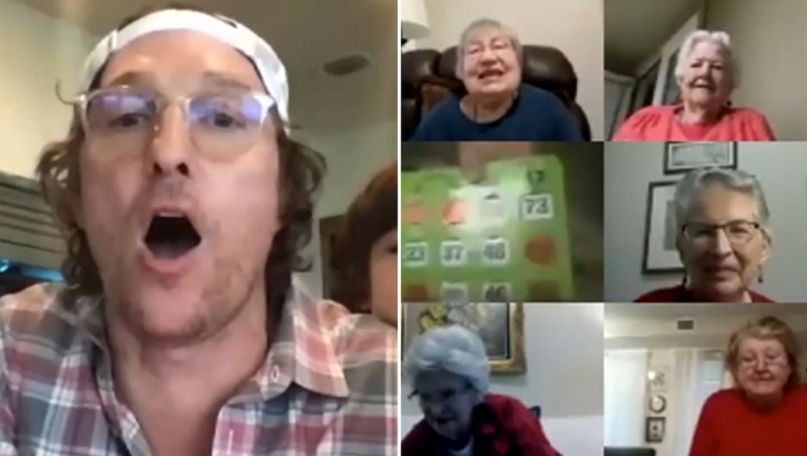 On Monday, the veteran actor hosted a virtual bingo session for residents of The Enclave at Round Rock Senior Living in Austin. Quarantining at home with his wife, mother, and children, the 50-year-old McConaughey called numbers over Zoom for self-isolating members of the retirement community. It was extremely wholesome.

In a video posted to Round Rock’s Facebook page, McConaughey and his family are seen enthusiastically cheering on the double-winners of the latest round. Treat yourself to a smile and watch it below.

This isn’t the first time the Oscar-winning actor has taken to Zoom during our national shutdown. Last week, he made a surprise appearance duriing a digital meeting for University of Texas at Austin students and offered a message of hope: “Hang in there. We’re comin’ out the other side”.

However, it’s not at all unprecedented for the Texan native to make a cameo at his alma mater. Last year, McConaughey co-taught a class at the University called Script to Screen, and he’d been a visiting instructor there since 2015.

Outside of teaching and Zooming, McConaughey recently reunited with True Detective creator Nic Pizzolatto for a new FX show called Redeemer. Last year, he had a lead role in the not-so-good Guy Ritchie film The Gentlemen. For now, though, he’ll be playing the part of Cheerful Bingo Caller #1.

Thanks for talking with our @UTexasMoody team today, Professor McConaughey! https://t.co/GP8SFJXMR4