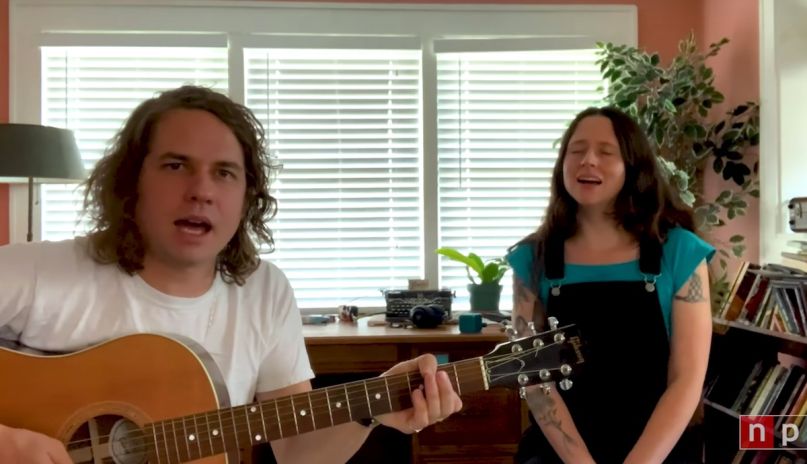 Even while on lockdown, Waxahatchee and Kevin Morby have been frequently checking in with fans via their regularly broadcast Instagram livestreams. Now, the two indie rockers have recorded a special quarantine-style session for NPR’s Tiny Desk (Home) Concert series.

Filmed at Morby’s actual tiny desk in his Kansas City home, the collaborative set spanned a total of four songs. The pair performed three originals: “Fire” and “Lilacs” off Waxahatchee’s excellent Saint Cloud, as well as “Beautiful Strangers”, a 2016 single Morby dedicated to victims of the Pulse nightclub shooting.

They closed their Tiny Desk appearance with a cover of “Farewell Transmission” by Songs: Ohia, aka Jason Molina. Waxahatchee and Morby put out a studio version of this cover for charity back in 2018. In a press release at the time, Morby said he and Waxahatchee bonded over Molina’s catalog while on tour.

“We would record all day, eating eggs from all the chickens running around, taking breaks to read old articles and watch live footage of Jason and his band,” said Morby. “He’s a true inspiration and there’s no other songwriter or vocalist quite like him. We are deeply honored to be able to sing his songs, and we do hope you enjoy listening as much as we enjoyed creating them.”