Fake Doctors, Real Friends will see the pair looking back at the cult classic show and their own relationship 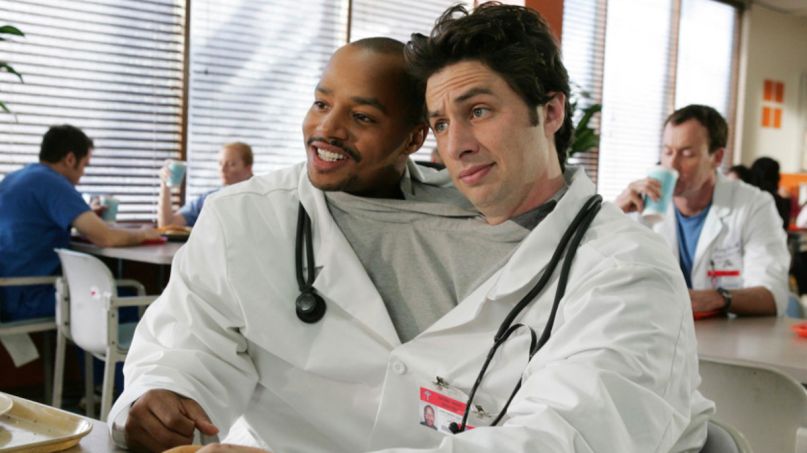 In the vein of Jenna Fischer and Angela Kinsey’s Office Ladies, the podcast will find Braff and Faison revisiting one episodes of Scrubs a week. As they explore the halls of Sacred Heart Hospital once more, they’ll also dig into their very real friendship. “I think we plan to be super honest, and not just about the show, but about our own lives,” Braff told The Hollywood Reporter. “We’re putting ourselves out there.”

With new episodes dropping every Tuesday via iHeartRadio, the pair are aiming “to do one or two a week.” That way, they’ll be able to respond to fan emails at scrubsiheart@gmail.com in relatively real time. They also plan on welcoming on guests from Scrubs, beginning with creator Bill Lawrence, who will join them in revisiting Season One’s classic “My Old Lady” episode.

The timing of the show’s launch is actually somewhat serendipitous. Before they could even begin recording, the world was gripped by the COVID-19 pandemic. There was thought of putting the whole thing off, but with Scrubs often hailed as a remarkably accurate medical show and people in desperate need of a good laugh right now, Fake Doctors, Real Friends actually seemed more appropriate than ever.

“…We had to hit pause and go well, ‘Should we still do it? How do we do it?’ We thought, ‘Well, we were going to do it anyway, it could be good to distract people, make people laugh, particularly because the show was such a love letter to hospitals and the medical community.’ In the back of our minds, we thought maybe this would be a chance to give them some love and honor them. So we just started doing it.”

For those hoping all this Scrubs talk could lead to a real reunion of sorts, Braff offered a glimmer of hope: “I think we all daydream about it one day. That’s really in Bill Lawrence’s hands. I don’t think there’s anybody, if it was the right project, and Bill wrote it, that wouldn’t say yes. We all have such love for the show, and for the fans.”

For now, listen to the first episode of Fake Doctors, Real Friends below.