A look behind the lyrics of rock's poet laureate of heartbreak, growing up, and fucking up

by Samantha Small and Jennifer Irving 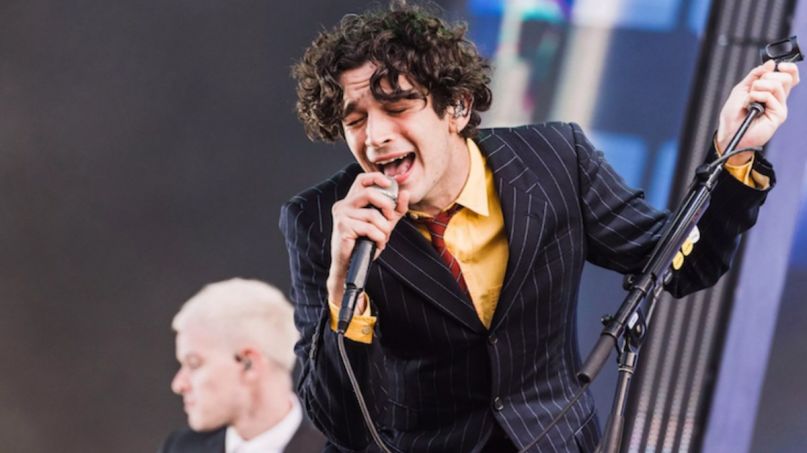 The lights go out, but suddenly everyone starts screaming. From the fog, a neon rectangle — or black and white depending on the era — lowers down and illuminates the stage. Screaming is still happening, of course, until you hear the infamous lines: “go down, soft sound.” Over the past seven years, for the hundreds, maybe thousands of shows they’ve played, The 1975 begins each set in the same exhilarating manner.

But for longtime fans, the theatrics are no longer just a spectacle: they’re a routine. This is The 1975 live show experience. Whether it be their 2013 teenage angst-ridden debut, their ‘80s pop sophomore LP, or the more recent culture critique within their third album, The 1975’s live shows are essentially exhibitions, or better yet, manifestations of the general motifs and themes of each album. And besides the fact frontman and lead vocalist Matty Healy will not play “Antichrist”, he is very aware of what fans want, and most of the time, he delivers. Yes, The 1975 are a quality band that routinely dominate the pop charts, but as is the case with most musicians, a lot of their success comes from the devoted fans who have propelled them from small pubs to sold-out areas.

So, even through the different changes of scenery, Healy recognizes the importance of certain songs to longtime fans and continues to perform them, even though their “era” is long gone. A lot of these tracks are from the eponymous 2013 album, yet few saw critical recognition. In a way, this grants them a special place in fans’ hearts. Maybe it’s more important to acknowledge that this album was not only fans’ intro to The 1975 but that its themes of heartbreak, growing up, and fucking up mirrored everything they were going through at the time. As the album has aged, and as others have been released, they feel as if they’ve grown up alongside it and The 1975.

It’s no secret The 1975 have their fair share of critics. They’re adored; they’re despised. But there is no denying — whatever your feelings may be — that they’re pop star legends with fans who will defend them to the grave. Regardless of your feelings toward the band, you can’t ignore that they have some great one-liners. With that said, we’ve collected some of The 1975’s fan-favorite lyrics.

So, when you see the rectangle come down, you can expect most of these songs to be accompanied by a lot of united screaming, crying, and impassioned joy. Basically, these lines just hit different.