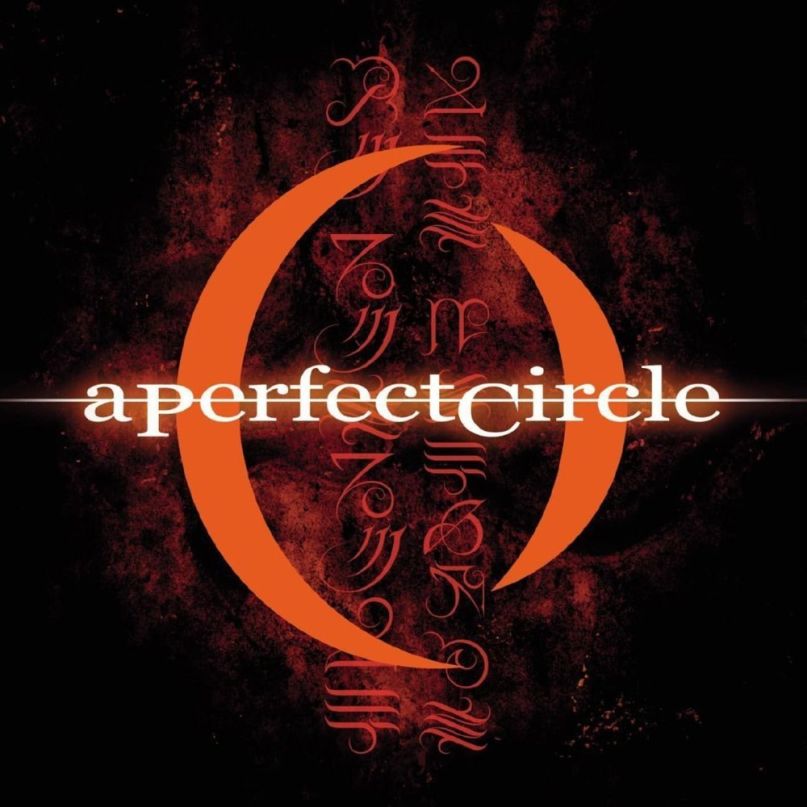 Outside of a few major examples — such as Dashboard Confessional, Audioslave, CSNY, Foo Fighters, Gorillaz, The Mars Volta, Cream, and Led Zeppelin — side projects, supergroups, and spin-offs are rarely as triumphant as the bands from which they originate. Of course, Californian troupe A Perfect Circle — founded by Tool vocalist Maynard James Keenan and former Tool guitar tech Billy Howerdel — must be added to that list. Over the past 20 years, and through four studio albums and numerous major tours, they’ve amassed a following that rivals those of any of the members’ outside endeavors. (Some fans even prefer APC to Tool, and for understandable reasons.)

True, their subsequent records offer stronger hooks, more decorative instrumentation, and a greater emphasis on overtly political and/or theoretical lyricism; yet, their debut LP, Mer de Noms (French for Sea of Names), undeniably laid important groundwork for what would come. Released 20 years ago this month, Mer de Noms serves as the bridge between Keenan’s identity and backing with Tool and his forging of new ground with his new collaborators. Beyond that, it remains one of this century’s chief examples of a seemingly ancillary act coming out of nowhere to quickly and continually seize the spotlight.

The origin of A Perfect Circle dates back to 1992, when Tool opened for Fishbone (another band for which Howerdel was a guitar tech). He and Keenan listened to some of Howerdel’s music, and when Keenan invited Howerdel to stay with him in North Hollywood a few years later, they continued to discuss working together. With the lengthy downtime in-between the creation and promotion of Tool’s second and third albums — 1996’s Ænima and 2001’s Lateralus — they began making A Perfect Circle a formal project, eventually recruiting bassist/violinist Paz Lenchantin (Zwan, Pixies), drummer Tim Alexander (Primus), and guitarist Troy Van Leeuwen (Failure, QOTSA). Although he played with the band during preliminary live shows, as well as on the first track of Mer de Noms (“The Hollow”), Alexander was replaced by Josh Freese — who, like his brother Jason, was already an established session musician — when they entered the studio.

Fascinatingly, Howerdel initially envisioned a female singer for his music, but logically decided that having Keenan attached would be the right move for several reasons. In a March 2001 chat with Concert Livewire, Van Leeuwen verifies that A Perfect Circle’s initial popularity partially came from having Keenan attached. He adds: “I know that the material would be just as good and it’d be just as interesting, but I think [the success] was because of the anticipation for the next Tool record.” On Keenan’s end, he told the Los Angeles Times’ Steve Appleford in April 2000 that the new venture was a means for him to express his emotions in new ways.

Comparisons between Tool and A Perfect Circle were inevitable, even though all of the members — especially Keenan — constantly reiterated that APC was just as vital as anything else they were involved in at the time. As Appleford aptly put it, “Keenan’s dual citizenship puts the singer in a virtually unprecedented position for a rock star. Key members of best-selling acts often embark on solo projects but rarely attempt a separate-but-equal band.” Similarly, the band’s attorney, Peter Paterno, admitted that A Perfect Circle generated “more [record label] interest … than any [other band] I’ve seen come up in Los Angeles in years” because of their “quality of music” and “commercial pedigree.” He concluded: “Tool fans have been waiting years to hear something new from Maynard.”

The reigning eminence and charisma of A Perfect Circle’s music was already somewhat on Mers de Noms. Sure, it’s more traditional musically than later albums (when the band would delve further into atmospheric/art rock), but it nevertheless signifies what’s special about Keenan and Howerdel’s partnership by infusing the bleak and abstract nature of the former’s other outfit with a pronounced hard rock, grunge, and alternative metal approachability. Likewise, Keenan’s token use of complicated imagery and thought-provoking subject matter is here, too, but there’s also the fact that most of the song titles are simply named after people he and Howerdel knew. Even the cover art represents that merger of the obvious and the obfuscated since the symbols on it translate to “La Cascade des Prénoms” or “The Waterfall of First Names”.

The LP immediately set a new precedent upon release, as it sold almost 200,000 copies during its first week and entered the Billboard 200 at No. 4 (making it the highest ever debut for a rock album up to that point). It endured on the charts for almost a full year, eventually being certified platinum by the RIAA in October 2000. Those sales — combined with corresponding tours alongside Nine Inch Nails, Our Lady Peace, and Smashing Pumpkins (plus positive reviews from publications like Entertainment Weekly, NME, Melody Maker, and Q) — meant that A Perfect Circle had firmly declared its dominance right out of the gate.

So, how does Mer de Noms hold up today? Well, it’s arguably the weakest of the three original studio albums (2004’s Emotive was almost entirely comprised of anti-war covers), as it’s the least varied and idiosyncratic. For instance, opener “The Hollow” does a good job of evoking certain Tool trademarks (mesmeric rhythms and dreary guitar riffs) while also following a more commercial hard rock/alternative metal structure. By and large, the same can be said for the moodily ornate “Magdalena”, the deeply personal and anti-religious “Judith” (which wouldn’t have been out of place on Ænima), the brash and industrial “Thinking of You”, and the beautifully orchestral, mystical, and acoustic “Renholdër”. That’s not to say that these tracks feel too familiar or banal, but rather that they best encapsulate how Keenan sort of had one creative toe in each band’s artistic pond at this point.

Elsewhere, however, Mer de Noms reveals more of the individualization A Perfect Circle would come to possess. “Rose” and “Thomas” wisely juxtapose ever-evolving mechanical tension and airy relief beneath their ritualistic pacing and meditations. (These consistent fluctuations and stylistic hodgepodges would become emblems of the band moving forward.) “Orestes” is wonderfully gothic and spiritual — with subtly inventive syncopation and piercing vocal harmonies — whereas “3 Libras” is relatively sparse, hooky, and accessible. Afterward, “Sleeping Beauty” kind of taps into the early ’90s pulsations of Stone Temple Pilots, Soundgarden, and Alice in Chains. The penultimate “Breña” houses sensitively pronounced melodies unlike much of what Keenan has offered before, and “Over” is a chillingly empty closer whose resonant singing, piano patterns, and gourd kalimba taps pinpoint the emotional freedom Keenan sought.

Few bands completely find their footing with their first record, so it’s completely reasonable that Mer de Noms has a bit of an identity crisis. But, it’s still a very strong introductory LP in its own right, as well as an intriguing steppingstone between where Keenan was with Tool and where he, Howerdel, and the rest of the troupe would take APC once 2003’s Thirteenth Step exposed a more distinctive and laudable persona. Most of all, it remains impressive and important for the amount of success it brought the group — as a representative of side projects, spin-offs, and supergroups as a whole — right out of the gate.