As well as a Prince bass drum head 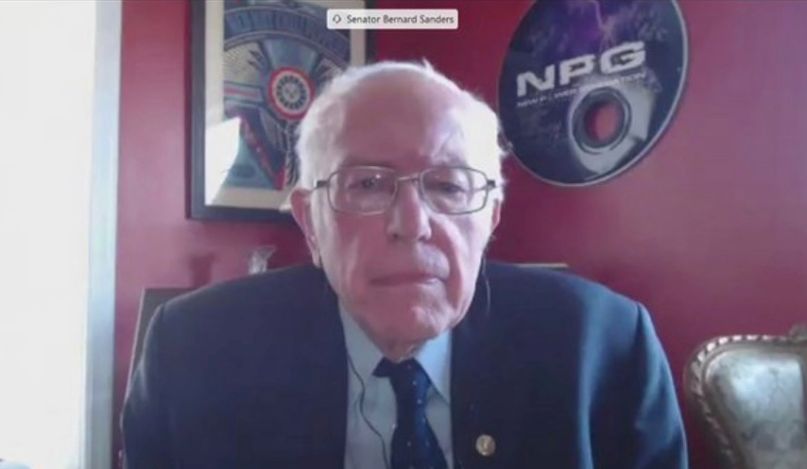 One of the unexpected consequences of the global quarantine is the chance to get a peak inside the homes of celebrities, politicians, and other high-profile public figures. Livestreams and webinars don’t just provide entertainment, they also scratch a voyeuristic itch. For instance, if not for the quarantine, how else would we have learned that Bernie Sanders has a Red Hot Chili Peppers poster and a Prince bass drum head hanging up in his home office?

The music memorabilia could be seen in the background as Senator Sanders posed questions during a virtual hearing about COVID-19 on Tuesday. To his left was a framed Red Hot Chili Peppers poster, and to his right hung a bass drum head from Prince’s backing band New Power Generation. It’s worth noting that Bernie previously recruited both bands to play presidential campaign rallies, so these aren’t just your standard wall decorations.

Of course, during his most recent presidential campaign, a number of other bands threw their support behind Sanders. It got to a point where his rallies basically doubled as a musical festival.

On another note, of course Bernie uses the shitty black earbuds you can buy at 7-Eleven for $5.99.

Let's note that Bernie Sanders has the best background of any Senator: Red Hot Chili Peppers and NPG. #SenateHearing pic.twitter.com/RWHQ6KY23p

Bernie video conferencing into this senate floor hearing with a Red Hot Chili Peppers poster behind him is too much for me today. I’m going back to sleep 😂

Bernie being a Red Hot Chili Peppers fan was not something I saw coming out of this committee hearing. pic.twitter.com/Ba4Gcsi05G

Is that … is that a New Power Generation bass drum head behind Bernie Sanders? pic.twitter.com/PU4O9eNis8