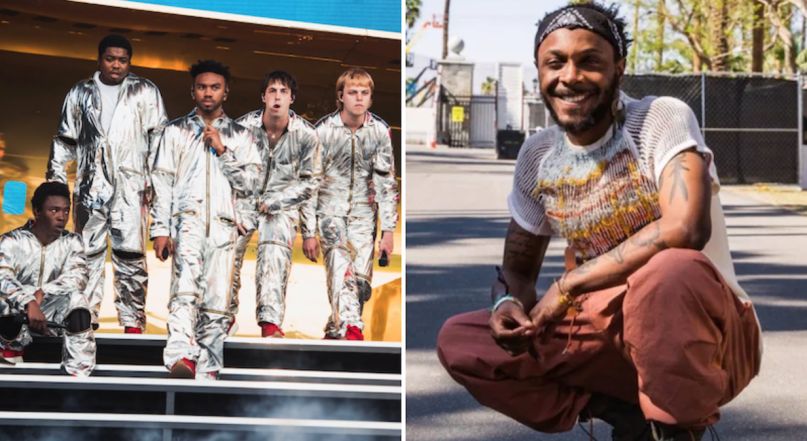 A few members of BROCKHAMPTON have been in quarantine together, and they haven’t been idle. The group has been doing a weekly, password-protected livestream called Technical Difficulties Radio, debuting completely new material each broadcast. However, their label, RCA, reportedly hasn’t been giving approval for the music’s release, which is likely why it only shows up on YouTube briefly before being pulled. That means you likely only have a few days to hear the new tracks premiered this week, “chain on / hold me” featuring JPEGMAFIA and “fishbone”.

With all the movements in the composition, “chain on / hold me” could well be two songs — or six, if you count the samples of Wu-Tang Clan’s “C.R.E.A.M.”, KRS-One’s “Mad Crew” and “Sound of da Police”, and Gil Scott-Heron and Brian Jackson’s “We Almost Lost Detroit”. After an intro from Kevin Abstract, JPEGMAFIA comes in with a reference-laden verse that nods to Dua Lipa, Street Fighter, That’s So Raven, professional wrestlers, Lance Armstrong, and Vine. Abstract then comes in for another verse before Joba sings the refrain “Hold me by surprise/ And try to remember yesterday.”

“fishbone”, meanwhile, features most of the BROCKHAMPTON boys except Matt Champion. It even features a vocal appearance from group producer Jabari Manwa, who’s been picking up more vocal duties throughout Technical Difficulties. In addition to joining Abstract on the hook, Manwa sings in AutoTune, “I’ma go and get my teeth, ah/ I’ma just smoke with me, ah/ Never gon’ set me free, ah.”