by Ben Kaye and Alex Young 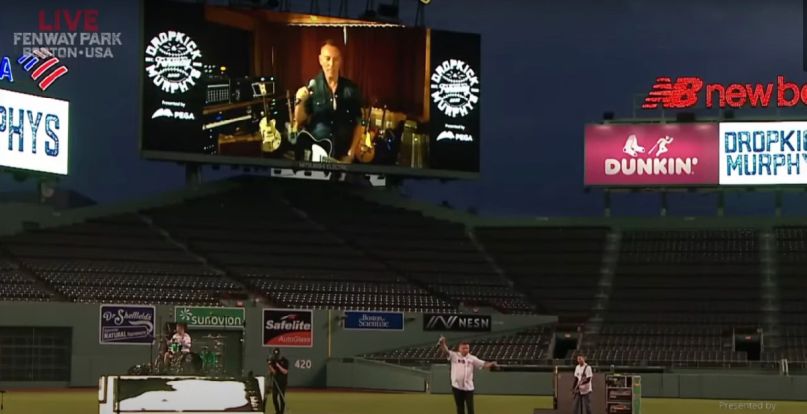 The gates around the storied Fenway Park opened today to welcome its first event since the COVID-19 pandemic. In front of stands empty of audience members, Dropkick Murphys took to the baseball diamond for a livestream concert. Though they were alone inside the stadium, Bruce Springsteen joined them remotely near the end of the set for a collaborative performance.

Dubbed Streaming Outta Fenway, the special benefit performance marked both the first time Dropkick played a full concert at Fenway, and the first such show of any kind sans an audience at a major US arena or stadium. Springsteen, meanwhile, made history in 2003 by becoming the first musician to play a ballpark-wide concert at Fenway. Thus it was fitting for The Boss to join the Boston Celtic punks for the unique show.

Dropkick treated viewers to a massive  career-spanning 28-song set that included favorites like “The Boys Are Back”, “Captain Kelly’s Kitchen”, “The Walking Dead”, “(F)lannigan’s Ball”, “Dirty Water”, and “I’m Shipping Up to Boston”. Near the end of show, Springsteen beamed in via Fenway Park’s video board to join the band for “Rose Tattoo” and “American Land”. Replay the full performance below.

The livestream was presented as a benefit for a trio of charities: the Boston Resiliency Fund, Feeding America, and Greater Boston’s Habitat for Humanity. By night’s end, over $100,000 in donations had been raised.

Earlier in the year, Dropkick Murphys livestreamed their annual St. Patrick’s Day concert, raising over $60,000 for the Boston Resiliency Fund.

Setlist:
The Boys Are Back
The State of Massachusetts
Captain Kelly’s Kitchen
Smash Shit Up
Sunshine Highway
The Bonny (Gerry Cinnamon cover)
Sandlot
Tessie
Jimmy Collins’ Wake
The Fighting 69th
The Walking Dead
4-15-13
Rebels with a Cause
Prisoner’s Song
The Warrior’s Code
The Auld Triangle
You Can’t Put Your Arms Around a Memory (Johnny Thunders cover)
Mick Jones Nicked My Pudding
Queen of Suffolk County
Johnny, I Hardly Knew Ya
Amazing Grace
(F)lannigan’s Ball
Out of Our Heads
Dirty Water (The Standells cover)
Rose Tattoo (with Bruce Springsteen)
American Land (Bruce Springsteen cover) (with Bruce Springsteen)
I’m Shipping Up to Boston
Until the Next Time