"People talk how [cannabis is] good for cancer patients. C'mon, it's good for any f**king patient!" 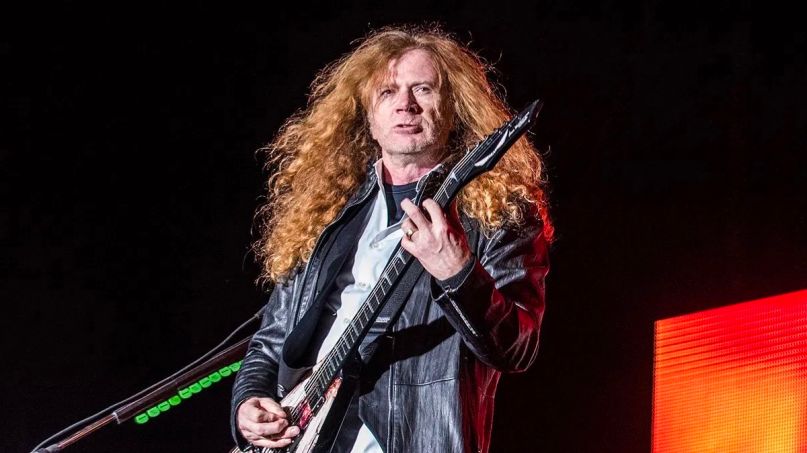 Megadeth were hoping to hit the studio this spring to properly record their new album, but the COVID-19 pandemic curtailed those plans. That said, frontman Dave Mustaine didn’t let the lockdown stop him from recording vocals this week.

A new tweet from the band shows a pic of Mustaine in his home studio, with the caption, “Laying down some vocals today! #Megadeth16.” The hashtag refers to Megadeth’s upcoming 16th album, the follow up to 2016’s Dystopia, which yielded the metal legends a Grammy for its title track.

Last month, bassist David Ellefson said that the new album was “written and ready to be recorded” and that the band members had planned to convene in Nashville to record the LP. However, the pandemic put those plans on hold, with Ellefson adding, “Once the lockdown lifts and it’s safe, we’ll be ready to rock ASAP.” It seems like Mustaine is not waiting around, recording what he can while in isolation.

Megadeth originally had hoped to record a new album last year, but Mustaine was diagnosed with throat cancer in June, forcing the band to take a break from recording and touring. He has since been declared cancer-free after numerous treatments, and detailed his health battle in an extensive new interview with Metal Hammer.

In addition to the traditional radiation and chemotherapy treatments, Mustaine says he turned to cannabis for relief. “I think the world is just now finding out the beauty of cannabis and everything it can do for you,” explained Mustaine to Metal Hammer. “I hear people talk how it’s good for cancer patients. C’mon, it’s good for any f**king patient!”

He added, “The radiation zapped my salivary glands so I couldn’t make spit, which made it really hard to swallow and get food down. They gave me this crazy mouthwash to use that had Benadryl and lidocaine in it, but I still couldn’t eat. So cannabis helped with that, except I got a terrible craving for kiddie cereal. I went to the store and got, like, 20 boxes.”

As of now, no official announcement has been made regarding the status of Megadeth’s co-headlining North American tour with Lamb of God. The first leg is scheduled to kick off June 12th, so there’s a very good chance the tour will be postponed, at the very least.