Drive-In Concerts Are Now a Thing in Denmark

Attendees listened on their FM radios 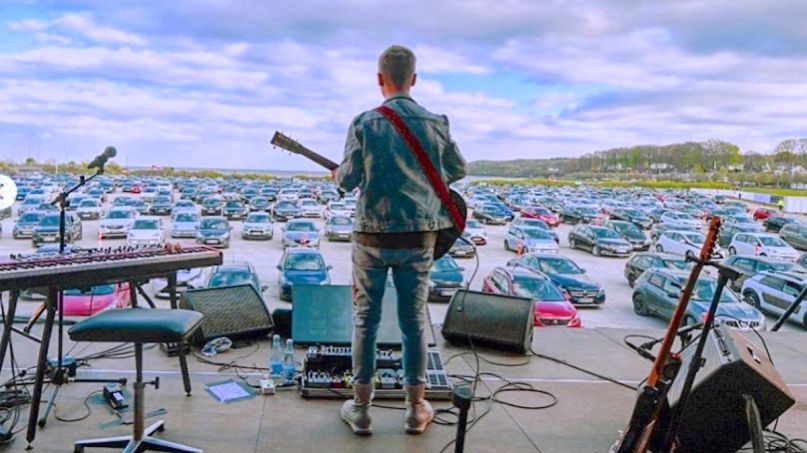 The coronavirus pandemic swiftly put an end to concerts for the foreseeable future, with every level of touring halted until COVID-19 is under control. Experts are predicting large-scale gatherings won’t be safe until “fall 2021 at the earliest” — but apparently Denmark can’t wait that long. Last week, the city of Aarhus held a drive-in concert where audience members could watch live music from the comfort of their cars.

The government in Denmark has enforced social distancing measures akin to those in the US, but Aarhus residents read those rules and decided to get creative. A stage was erected on the city’s outskirts so that singer-songwriter Mads Langer could perform to an audience in-person instead of via livestream (via Stereogum). From inside their socially-distanced cars, attendees could turn their FM dials to the designated radio station to hear his set live on air, hence experiencing a concert the way you would a drive-in movie.

As the person who actually gave the performance, Langer seems pretty content with how the experience unfolded. “That feeling when you reunite with your audience although they were sitting safely in their cars,” he wrote on Instagram, captioning a photo of him grinning before a distanced sea of vehicles. Of course, from his point of view it almost looks like he’s performing to a parking lot.

According to the people who organized the event, it went pretty smoothly. “There are only positive messages from our people on the spot,” a police officer told local newspaper Jyllands-Posten. “It has been controlled. People have behaved as they should, and all the cars were out of place within half an hour.”

If your country isn’t hosting drive-in concerts (yet) or you don’t have a car to begin with, don’t fret. Your favorite bands are still playing free concerts online pretty regularly these days. Keep tabs on which artists are performing with our updated list of livestream concerts here.