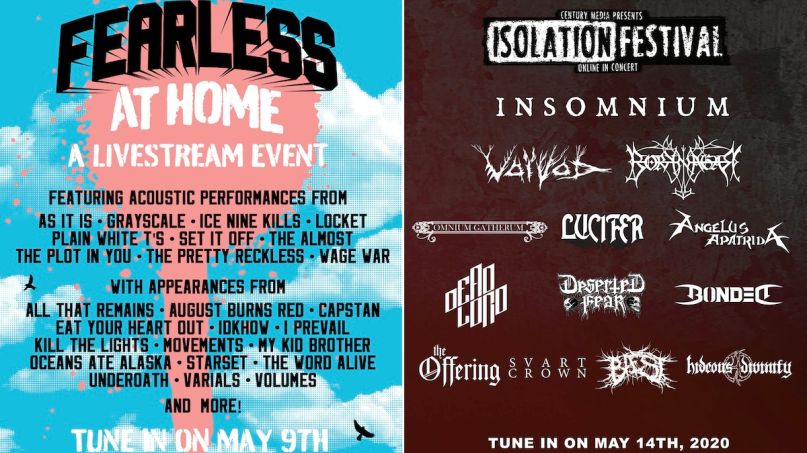 Two record labels specializing in heavy music are giving their bands a platform to perform for fans during the pandemic. Fearless Records is staging an “At Home” live-streaming event on May 9th, while Century Media is holding the “Isolation Festival” on May 14th.

The Fearless event will feature acoustic performances from The Pretty Reckless, who just inked a new deal with the label, plus As It Is, Grayscale, Ice Nine Kills, Locket, Plain White T’s, Set It Off, The Almost, The Plot In You, and Wage War.

In addition, there’ll be appearances from members of All That Remains, August Burns Red, Capstan, Eat Your Heart Out, iDKHOW, I Prevail, Kill the Lights, Movements, My Kid Brother, Oceans Ate Alaska, Starset, The Word Alive, Underoath, Varials, and Volumes.

“Fearless At Home” begins at 3:00 p.m. ET / 12:00 p.m. PT this Saturday, May 9th, and will stream via the label’s YouTube channel. With the concert industry shut down at the moment, funds generated from the stream and event-branded merch will help benefit the label’s bands and their crew, as well as Live Nation’s Crew Nation Global Relief Fund.

The Century Media event will be broadcast on the label’s YouTube channel, and feature exclusive sets that the artists recorded specifically for the 24-hour livestream.

Tune in on May 9th and May 14th for “Fearless At Home” and Century Media “Isolation Festival”, respectively.