The Trip to Greece Offers a Fitting Farewell: Review 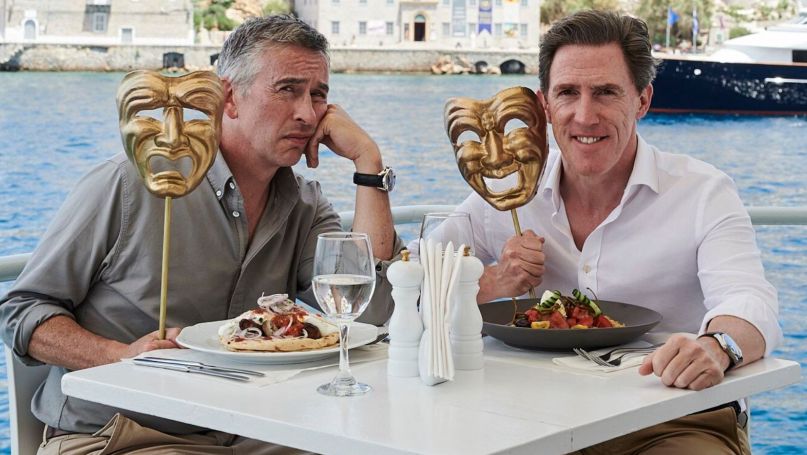 Bon Voyage: Funnymen Steve Coogan and Rob Brydon — playing fictionalized versions of themselves — once again join director Michael Winterbottom on a European excursion, this time tracing Odyseus’ 10-year journey home from Troy in a single week. The Trip series might best be described as a mash-up of an Anthony Bourdain special with Whose Line Is It Anyway? — a colorful combination of culture, comedy, camaraderie, and culinary exploration set in some of Europe’s most visually striking locales. However, at its best (the original film set in the north of England and its Italian sequel), the series, thin on plot as it may be, also poignantly chronicles two middle-aged fathers with problems, frustrations, and fears that many men endure at that age. Fortunately, the fourth and final installment of the series, The Trip to Greece, packs plenty of pathos to match its sights and silliness.

Let’s Forget Spain: Brydon recently told our own Justin Gerber that, as a comedian, he “likes a well-timed exit … that leaves people wanting more.” The Trip to Spain, unfortunately, left many viewers feeling that the series had possibly run its course. Maybe the novelty had started to wear thin, perhaps the bits improvised by Coogan and Brydon had simply failed to land as frequently, or maybe a more compelling story line was needed to ground the journey in a deeper purpose than comparing Mick Jagger impressions over seafood on the Iberian peninsula. Put it this way: it wasn’t the food or the scenery that failed the third film.

For one, I’d argue that Coogan played it too chummy. The Oscar nominee’s exaggerated egomania as a self-proclaimed brilliant dramatic actor typecast as a light entertainer had played perfectly alongside Brydon’s contented, button-pushing, ultimate travel pest character in the first two films. Luckily, Greece finds a more workable give-and-take between the impression-happy family man and the disgruntled artist who no longer has any reason to feel slighted. In fact, Brydon’s quiet, mannered way of taking Coogan down a peg (see below) is a sweet turning of the tables.

Come, Come, Mr. Bond: The improvised bits between Coogan and Brydon ultimately make or break each film. The duo have shown that if Shakespeare can be done in the park, then an eye-damning Anthony Hopkins from The Bounty or a foul-mouthed De Niro can surely chew the scenery staring out at some of Europe’s most stunning vistas or dining at Its finest restaurants. While nothing can top classic bits like Coogan’s eulogizing Brydon or Michael Caine’s changing voice, Greece does manage to add a couple numbers to the duo’s greatest hits. Only Coogan and Brydon could bring us the legendary comedy pairing of Laurel and Tom Hardy, and the two add Dustin Hoffman to their overlapping repertoire of impersonations. Again, it’s often Brydon’s needling or revealing appeals to Coogan’s vanity that reap the smartest laughs, as in the following exchange:

Brydon: “What are you most proud of?”

Brydon: “For me, it would be my children.”

Coogan: “Well, you haven’t got any BAFTAs.”

Brydon: “Though, you do have children.”

Their Odyssey: While you can blink and miss the plot in The Trip movies, the personal circumstances of Coogan and Brydon’s characters have quietly been the backbone of the series, the emotional structure that supports the silliness and makes it seem not only earned but necessary. We’ve seen Coogan choose career over time with family and later regret it. We’ve seen Brydon, worn down and unsatisfied in his family life, make a marital mistake he immediately wishes he could take back. This final film brings a bittersweet conclusion to their arcs that feels right. Coogan, through staggering loss, gets pulled closer than ever to his family, and Brydon (with an assist from Hugh Grant) gets reminded that “home” is more than the neat brick building we see him leaving and returning to in the previous films. One of the more moving scenes finds Coogan leaving their ferry as Brydon’s wife, Sally, comes aboard. It’s a symbolic end to an era, and, ironically, The Trip series ultimately becomes more about two friends finding their way home.

The Last Supper: “Let’s come back another day,” Coogan tells Brydon as he points to Ithaca. “We will,” responds Brydon. And whether or not the pair ever do as part of The Trip series, fans will like to imagine that the characters do eventually return. As Coogan and Brydon’s decade together as travelmates draws to an end, viewers will recall their favorite beauty spots and the most delicious-looking meals, but they might just as well think about how their own lives have changed over the past 10 years: paths taken, mistakes made, and lessons learned. No doubt it’s been an unpredictable journey, full of beauty, tears, and silliness, such is The Trip to Greece and the very best of this series and this life.

Where I Can See It: The Trip to Greece will be going straight to VOD on Friday, May 22nd.