Her upcoming record, Christ Mocked and the End of a Relationship, has set a new release date of July 17th 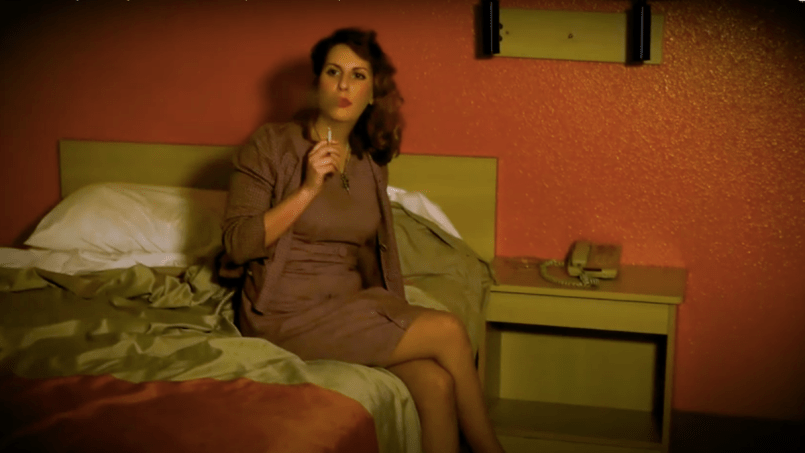 Grace Sings Sludge, the solo project from Grace Cooper of The Sandwitches, has shared the new song “Friend to All”. It’s the latest single off her forthcoming album Christ Mocked and the End of a Relationship, which just received the new release date of July 17th.

Christ Mocked… is her fifth album under the Grace Sings Sludge banner, but the first recorded at a proper studio. If “Friend to All” is any indication, she’s definitely benefiting from crisper production. The new single is a lovely journey into gothic folk. Over gentle, minor-key guitars, Cooper spins an anxious tale of a downtrodden woman who’s “been friends to all,” in her own way. Cooper’s singing is expansive and expressive; she loves to whittle down a vowel until it’s little more than a hum, and then flip her voice upwards and let it soar.

The accompanying music video was filmed inside a Motel 6, as well as a derelict incinerator building. In a statement, she explained how the noir-inspired visuals came together.

“”Friend To All” is my hokey noir take on disillusionment and disassociation. Directed and edited by long time friend Wesley Smith Wes, Jeff Williams and I were part of a rag tag band of teenage goths that would loiter all night behind the bowling alley on monument boulevard (Concord, CA) and make these really funny dark, gross movies “Bad Habit Productions.” It seemed meant to be we get back together after 15 years or so to film this. Filmed at Motel 6 and in an abandoned incinerator building in Sacramento with additional help from Linda Whiteman and Julian Maestas.”

Check out “Friend to All” by Grace Sings Sludge below. Christ Mocked and the End of a Relationship, which at one time was scheduled for an April 10th release, is now set to drop on July 17th. Pre-orders are available now. Previously, she shared the lead single “Falling in love with him again was the most exciting time of my life”.