HBO Max Officially Launches: Full List of Movies and TV Shows, How to Sign Up, and Everything Else to Know 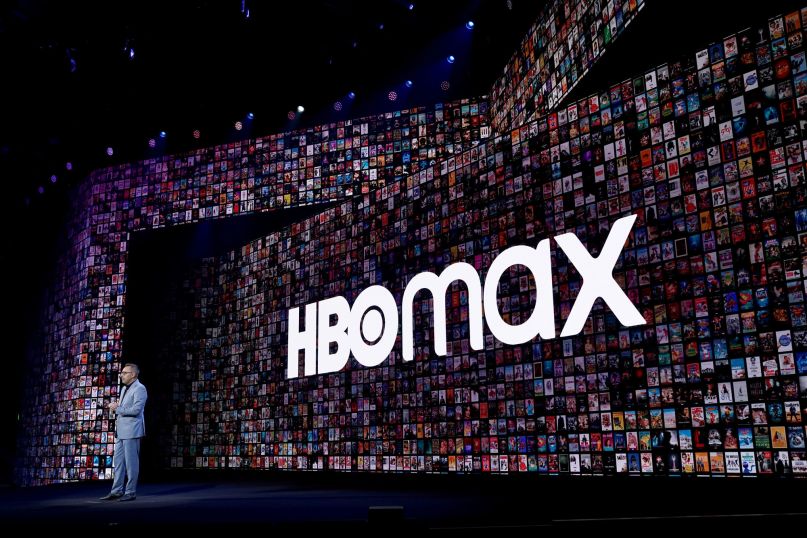 Among the notable TV series currently available to stream: all 10 seasons of Friends; Rick and Morty; The Bachelor; Anthony Bourdain’s Parts Unknown; and The Fresh Prince of Bel-Air; plus existing HBO favorites like Curb Your Enthusiasm, Game of Thrones, Succession, Veep, and The Sopranos.

In the months ahead, subscribers can also look forward to HBO’s Perry Mason reboot starring Matthew Rhys; a new season of the Duplass brothers’ Room 104; Jordan Peele’s adaptation of Lovecraft Country; a spin-off series based on Stephen King’s The Shining; J.J. Abrams’ Justice League Dark, and the additions of the South Park, Gossip Girl, The West Wing catalogs.

On the film front, subscribers can currently stream all eight Harry Potter films; Joker;  the Alien franchise; A Star is Born; Crazy Rich Asians; and Studio Ghibli’s full anime catalog, which is available in the US for the first time. Also available are classic films like Casablanca, The Wizard of Oz, Citizen Kane,  2001: A Space Odyssey, Rebel Without a Cause, Singin’ in the Rain, and The Beatles’ A Hard Day’s Night.

You can sign up for HBO Max through its website, or through Apple, Google Play, Chromecast, PlayStation 4, Xbox One, Hulu, DirecTV, YouTube TV, and select cable providers. HBO Max comes with a seven-day free trial, after which you’ll be charged $14.99 per month.

Below, you can find the full list of programming available at launch, as well as details on other titles set to be rolled out in the coming weeks. Additionally, you can find specific information on the differences between HBO Max, HBO Go, and HBO Now, as well details on to sign up if you already are a subscriber to one of these existing platforms.

Craftopia is an epic kids crafting competition show hosted and executive produced by YouTube influencer Lauren Riihimaki aka (“LaurDIY”). Creating and demonstrating crafts to over 8.9 million subscribers on her YouTube channel, LaurDIY has been deemed the “millennial Martha Stewart” by Forbes. On “Craftopia,” 9 to 15-year old contestants put their imaginations to the test and make their crafting dreams come true in a magical studio. After racing to fill up their carts with inspiring materials from the studio “store,” crafters meet larger-than-life challenges, making truly inventive and amazing creations in order to take home the ‘Craftrophia.’

Love Life, the first full-length scripted series to star Oscar nominee Anna Kendrick, is about the journey from first love to last love, and how the people we’re with along the way make us into who we are when we finally end up with someone forever. This fresh take on a romantic comedy anthology series is from creator and co-showrunner Sam Boyd (In a Relationship) and is produced by Lionsgate Television and Feigco Entertainment. The series will follow a different protagonist’s quest for love each season, with each half-hour episode telling the story of one of their relationships.

Looney Tunes Cartoons, an all-new series from Warner Bros. Animation starring the cherished Looney Tunes characters. Looney Tunes Cartoons echoes the high production value and process of the original “Looney Tunes” theatrical shorts with a cartoonist-driven approach to storytelling. Marquee “Looney Tunes” characters will be featured in their classic pairings in simple, gag-driven and visually vibrant stories. The new series will include 80 eleven-minute episodes, each comprised of animated shorts that vary in length and include adapted storylines for today’s audience. Fans can also look forward to holiday-themed specials.

The Not Too Late Show with Elmo

Directed and produced by Kirby Dick and Amy Ziering (The Hunting Ground, The Invisible War), and first reported by the New York Times, On The Record presents the powerful haunting story of music executive Drew Dixon (collaborator on hit records by Method Man and Mary J. Blige, Estelle and Kanye West, and Whitney Houston) as she grapples with her decision to become one of the first women of color, in the wake of #MeToo, to come forward and publicly accuse hip-hop mogul Russell Simmons of sexual assault.

Inside Carbonaro, Season One (TruTV)

I May Destroy You, Series Premiere (HBO)

Karma takes sixteen contestants, ranging in age from 12 to 15, completely off the grid, away from parents and the normal comforts of home, to solve puzzles and overcome physical challenges, with the laws of karma setting the rules. This adventure competition series, led by YouTube host Michelle Khare, will test the mental and physical stamina of its young contestants as they unravel how their social actions impact their success in the game.

This drama series follows the origins of American fiction’s most legendary criminal defense lawyer, Perry Mason. When the case of the decade breaks down his door, Mason’s relentless pursuit of the truth reveals a fractured city and just maybe, a pathway to redemption for himself.

Based on the animated series Adventure Time created by Pendleton Ward and executive produced by Adam Muto, these four breakout specials explore the unseen corners of the world with characters both familiar and brand new. The first of these specials is BMO, which follows the lovable little robot on a new adventure. When there’s a deadly space emergency in the farthest reaches of the galaxy, there’s only one hero to call, and it’s probably not BMO. Except that this time it is!

I’ll Be Gone in the Dark, Docuseries Premiere (HBO)

A six-part documentary series based on the book of the same name and explores writer Michelle McNamara’s investigation into the dark world of a violent predator she dubbed the Golden State Killer.

This searing documentary shadows a group of brave activists risking their lives to confront the ongoing anti-LGBTQ persecution in the repressive and closed Russian republic of Chechnya.

How to Get HBO Max

— HBO Go is a service available for subscribers who still have a cable TV subscription of HBO. This includes all of HBO’s content and programming and subscribers connect using their TV login details. It costs them nothing extra. It’s essentially their OnDemand.

— HBO Now is the same thing as HBO Go, containing all of the same original and syndicated content within, but it’s for those without a cable TV subscription of HBO. In other words, it’s the standalone HBO experience that costs $15 dollars a month.

Good question and one that makes zero logical sense, right? After all, HBO Max has thousands upon thousands of hours of content, features countless additional programming, and even has a newer, more robust interface. Why not just dissolve HBO Now?

Well, as Variety pointed out not too long ago, HBO Now boasts over 8 million subscribers, and forcing them to transfer to a new service could be “disruptive.” What’s more, HBO has several distribution deals in place with Apple, Google and Roku, all of which can lead to major legal mumbo jumbo. So, this is why we have three mildly confusing options.

So, Which Service Is Worth Subscribing To?

Really? It’s HBO Max. C’mon! Again, why spend $15 dollars for less content by sticking with HBO Now? It makes no sense. And if you’re still coasting by with HBO Go, do yourself a favor and cancel that cable television subscription and start living the streaming life.

Because even after paying for all of the streaming services, be it Netflix, Hulu, Disney Plus, Peacock, etc, you’ll still save money in the long run. What’s more, you’ll have complete control over what you want to watch … and when you want to watch it.

More importantly, you’ll also have access to programming specific to HBO Max. This includes everything from a Friends reunion to new Looney Tunes cartoons to countless series in development, be it a spinoff to The Shining or even a Gremlins cartoon.

What If I’m Already Subscribed to HBO/HBO Go or HBO Now?

It depends. HBO Now subscribers billed directly through HBO will receive HBO Max upon launch at no extra cost. Meanwhile, HBO/HBO Go subscribers through one of AT&T’s TV services or Charter Communications will be automatically be upgraded to HBO Max. Yeah, it’s as confusing as it reads, which is why we’ve listed out AT&T’s many cable TV packages below…

Here are the following AT&T TV plans that get HBO Max at no additional charge:

Here are the following AT&T TV packages that offer one free year of HBO Max:

And because it wasn’t confusing enough: Here are the packages that aren’t eligible for any free trials, despite most of the packages from AT&T and DirecTV offering three months for free…

Okay, What If I’m Subscribed Through Comcast?

Comcast’s existing HBO subscribers with Xfinity X1 and Xfinity Flex will be able to log in to HBO Max on supported devices — for no additional charge — and new customers will be able to sign up for HBO Max at $14.99 monthly directly from Comcast (via Variety).

What About If I Have an Amazon Fire Stick or Roku?

Bad news. WarnerMedia doesn’t have agreements with either Amazon or Roku, which means you won’t be able to find the HBO Max app in either of their app stores.

So, What Devices and Services Do Work?

Plenty! You can get HBO Max through PS4 and Xbox One consoles, Samsung Smart TVs, Apple devices (iPhone, iPad, Apple TV),  Google devices (Android phones, tablets, and TVs), but also through Hulu, Optimum, Samsung, Verizon Fios internet, and YouTube TV. Subscribers of HBO through any of these mediums should automatically upgrade to HBO Max.

Actually, How Do I Cancel My Subscription to HBO Now?

Oof. Okay, well, know that your subscription to HBO Now automatically renews each month until you cancel. So, to avoid being charged for the next month, cancel your subscription at least 24 hours before your subscription renews. You can do that by accessing your personal profile on either your phone, computer, or tablet, clicking on Billing Information, and checking off Auto-Renew.