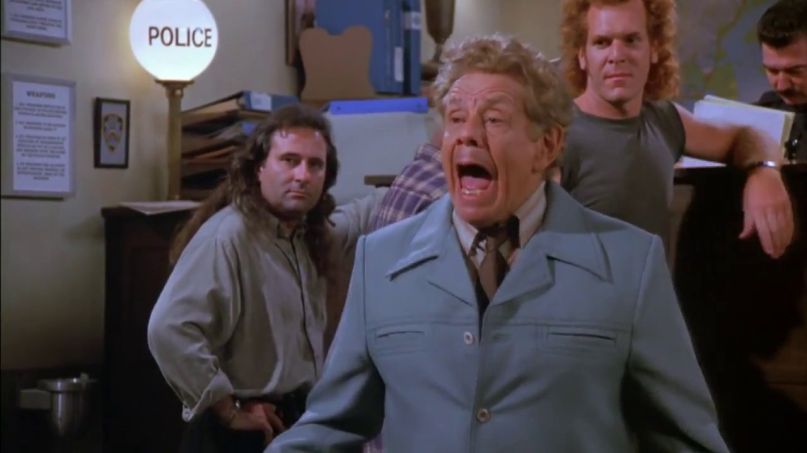 Jerry Stiller stole the screen. That’s not exactly a hot take, so much as it’s a known fact, but it’s worth saying on the day of his death. At 92 years old, the legendary comic lived a lifetime of on-screen vitriol, the likes of which felt limitless and ageless. So, if there’s anything more to say, it’s that we didn’t just lose a person, we lost an energy.

Because really, nobody could dust up a storm like Stiller. It’s why most of his famous lines all end with quotations, be it “Serenity now!” or “A Festivus for the rest of us!” or “That’s what I’m talking about!” Hell, he couldn’t even reference colleagues without making a banner statement, which is why we’ll always scream names like “Sid Farkus.”

Now, it’s almost impossible to distill a legacy into one clip, but if there was a proper In Memoriam for Stiller, it would have to be the blooper for Seinfeld s “The Little Kicks”. The scene finds Stiller’s Frank Costanza picking up his son George (Jason Alexander) from the police station and getting in a shouting match with Elaine (Julia Louis-Dreyfus).

As you’ll see below, nobody can hold it together. Louis-Dreyfus has a giggle fit, Alexander spills out of his chair, and the rest of the cast just crumbles. Stiller knows this and just keeps hammering it on harder each take. It’s a joy to watch — not surprisingly, the exact clip Louis-Dreyfus shared in her own tribute today — and Stiller at his finest…

Peak Constanza, if you will.