Because the Twitterverse is madness, some people actually criticized him for singling out white racists 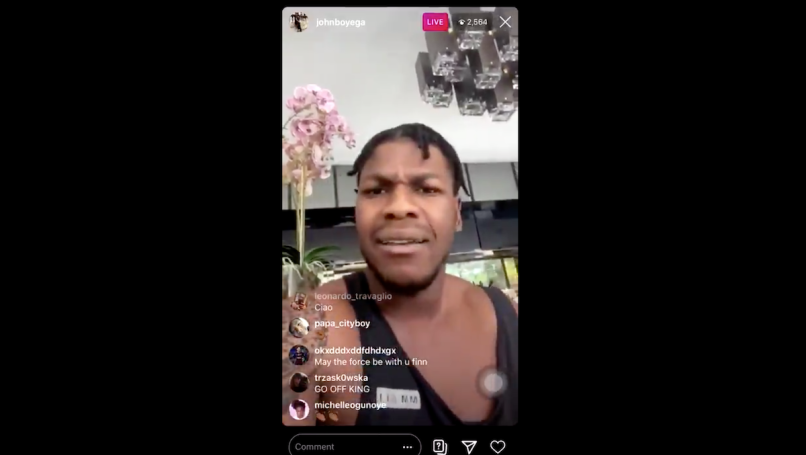 John Boyega is a man who stands by his words. Struck by the killing of George Floyd by a police officer in Minneapolis, the Star Wars actor tweeted out, “I really fucking hate racists.” When confronted by other Twitter users about his seemingly unassailable opinion, Boyega refused to apologize.

It began when Boyega posted a tribute to Floyd, the unarmed black man who was killed when a cop pinned his neck to the ground while he was handcuffed. “This just burns,” the actor wrote. “Seems to be a never ending cycle. The murderers need to be charged severely. Even in the face of death this man was given zero empathy.”

In a separate follow-up tweet, Boyega shared his aforementioned opinions on racists. And because the Twitterverse is a swirling netherworld of echoing contempt, people actually took issue with the sentiment.

Some Twitter users responded to Boyega by arguing that racism isn’t always just white-against-black. “I don’t care,” Boyega responded to one such follower. “That’s not what I’m talking about.”

One Nigerian Twitter user said he’d broken up with his girlfriend because she “said she hates whites,” and even this didn’t align with what Boyega was getting at. “I am talking about WHITE on BLACK racism. The kind that has ruined the world not causes a lil break up with your girlfriend.”

I am talking about WHITE on BLACK racism. The kind that has ruined the world not caused a lil break up with your girlfriend.

Obviously, the word “racist” isn’t defined as “white people who are prejudice against black people.” But equally obviously, that nuance wasn’t needed for Boyega’s remarks. He was speaking out in warranted rage about the horrifying trend that led to #BlackLivesMatter, and was responding to the same type of extenuation levied by the #AllLivesMatter counter argument. He wasn’t having it, and he stuck to his remarks during an Instagram Live response.

Boyega noted that Floyd’s death was just another example of a black man being killed by police officers on the streets while crying out, “I can’t breath,” referencing Eric Garner’s killing in 2014. “That’s a continuous cycle going on. And although I don’t live in the states, bruv I’m black; fuck that. So I say it again: Fuck you racist white people. I said what I said. And if you don’t fucking like it, go suck a dick.”

He went on to say he wouldn’t be “rattled” by anyone warning him his career could be in danger by voicing such strong opinions:

“Throughout my whole career as an actor — I’m gonna let you guys know this — I’m not the guy. I’m not Hollywood. I never, ever left the UK to go and live in LA for over a year. I never did. I’m from London. I’m from here. We have different fucking rules. We’re real. We speak truth, wear our emotions on the wrist. I’m also African. So stop taking the piss…”

Read the tweets and watch snippets of the Instagram Live video below.

This just burns. Seems to be a never ending cycle. The murderers need to be charged severely. Even in the face of death this man was given zero empathy. #RIPGeorgeFloyd #BlackLivesMatter #JusticeForGeorgeFloyd pic.twitter.com/gyuaoC6vUh

I don’t care. That’s not what I’m talking about.

Are you guys on twitter dedicated to seeing what’s in your head and not what I wrote? Take a break because you’re one of them. As i said you can’t force me to talk about what I’m not talkng about. Shut up.

Please do shut up. I am being specific to a topic. I am not talking about any other way. Given what is happening right now. So the wise thing for you to do is defo shut up. Do it well too my G.

I said what I said. Speak for yourself at all times x

This is my own personal account. I am not here for the kids.

John Boyega on Instagram live and dragging the hell out of white racists. this is what I live for! pic.twitter.com/nQytbhnzM7

John Boyega knows where he’s from I have to stan pic.twitter.com/wUYk3SWERt