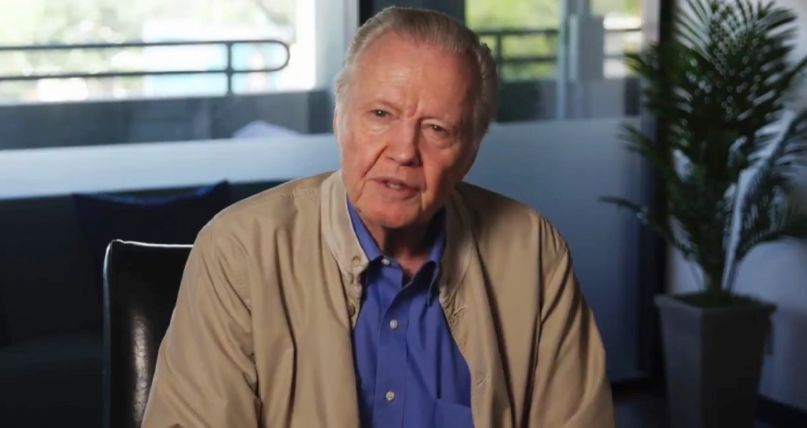 By all accounts, the Trump administration’s response to the COVID-19 pandemic has been an unmitigated disaster. Already 70,000 Americans have lost their lives due to the virus, and thousands more victims are being claimed each day. And that’s not to mention the economic consequences resulting from a nationwide shutdown that happened two months too late. But in the warped reality that is Conservative Twitter, everything is just fine and dandy. Just ask Trump’s old buddy and recent Medal of Freedom recipient Jon Voight who praises the president as a “hero” for his handling of the crisis.

Voight made the remarks in a new Twitter video called “A Message of Hope”, in which the actor showers Trump with praise that sounds like something you’d hear out of North Korea. Each sentence is more batshit crazy than the next: “He’s a true patriot who has fought singlehanded and knocked each poisoner down with his gifted tongue of truths and his true concern for everyone, every citizen,” Voight contends.“This is a man with great integrity, this is a man who held his head high, this is a man who took on evil and brought us to light. This is a man, a president who guided his nation and his people on a path to greatness.”

“This man, President Trump, has had to fight a war, a war that is bigger than anything our nation has witnessed in our lifetime, though he shielded us and protected us through it,” Voight adds. “This is what a man of great love does. A man that will protect his country till the end, with dignity, honor, respect and love.

“Yes, he will go down as the historic president of this millennium,” Voight concludes and predicts that Trump will receive a “gold medal” and be remembered as “a hero and a president of the United States who won the battle — the war of 2020.”

Previously, Voight called Trump the “greatest president since Abraham Lincoln” and threatened civil war against liberals if they followed through with Trump’s impeachment (which they did, lol). Voight also argues that Trump can’t possibly be racist because racism was “solved long ago”.

A Message of Hope pic.twitter.com/juAOIr7VLX