Lord of the Rings Cast to Reunite for YouTube Livestream

Elijah Wood, Orlando Bloom, and even Ian McKellen are all onboard 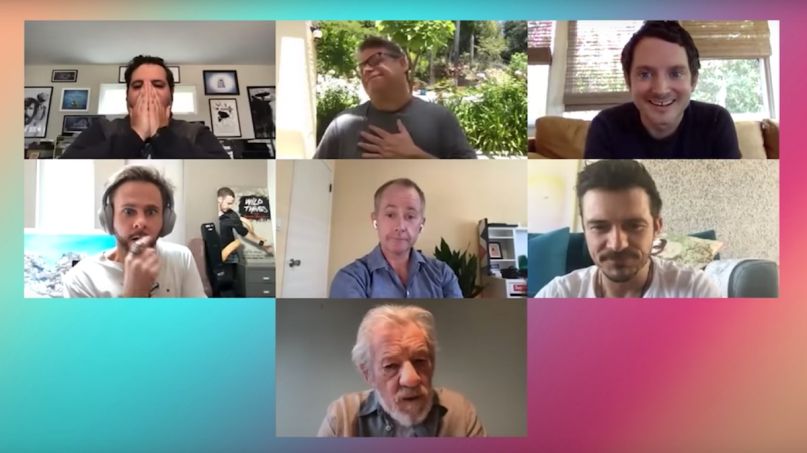 Everybody is keeping in touch with old friends these days. As it turns out, so are some fellas from Middle Earth. This Sunday, the cast of The Lord of the Rings will reunite for a special livestream — because apparently Gollum’s nonstop reading of The Hobbit was only the beginning.

The epic reunion is the latest installment in Josh Gad’s ongoing series “Reunited Apart”, which has already brought together the cast of The Goonies and Back to the Future during this period of self-isolation. In a teaser clip, Gad geeks out to Astin in an attempt to bring The Lord of the Rings family back together. “I was wondering what you might think about tracking down a certain group of buddies, comrades, pals,” says Gad. “Oh, what’s another word for it? Fellowship?”

Astin protests, but eventually cracks and phones up Elijah Wood. From there, one by one we see familiar, smiling faces pop into the frame: Dominic Monaghan, Billy Boyd, Orlando Bloom, and even Ian McKellen. Spoiler alert: the cast seems just as happy to see one another again as we are. It’s a fun and emotional clip, but it’s best to watch it yourself below so as to not ruin the sweet reactions.

By the way, that’s not even the full list of who will be stopping by the livestream. An Instagram teaser posted by Monaghan also reveals that Peter Jackson, Sala Baker, Viggo Mortensen, Andy Serkis, Sean Bean, Karl Urban, Miranda Otto, John Rhys-Davies, and Liv Tyler will be a part of it, too.

“Reunited Apart” goes down at 12:00 p.m. ET on May 31st over at Josh Gad’s YouTube channel. Don’t forget to bring some potatoes and a spare axe if you’ve got ’em. Word is the crew may need them.

There’s more Lord of the Rings lore coming down the line, too. Amazon and Peter Jackson’s own creative team are working on a Lord of the Rings TV series that takes place in the Second Age. With Amazon funneling $1 billion into the show’s pocket and the fact that it’s already renewed for a second season, it sounds like it just might meet our high expectations, if not exceed them.

This SUNDAY! Reunited apart. We will break the world wided interwebs! Link below! Subscribe! @theoneringnet https://youtu.be/NzPpOzBxJfk