Marking Cinco de Mayo with a sample of LeBron James 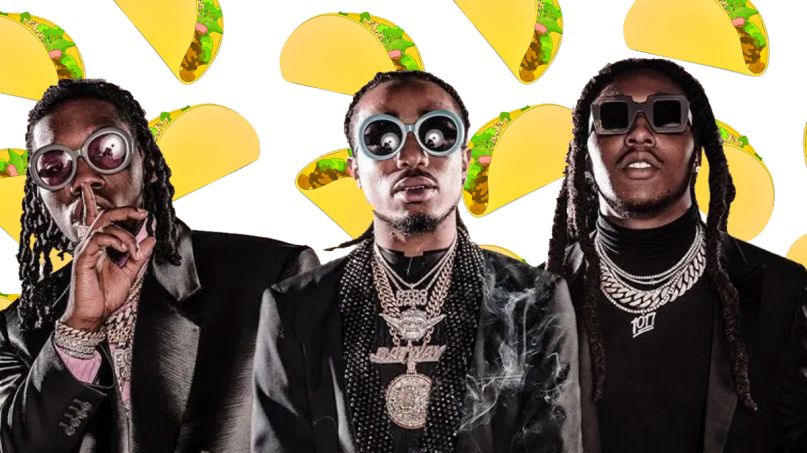 Cinco de Mayo falls on a Tuesday this year, and I didn’t even realize it until Migos dropped their new song. The auspiciously timed track is called “Taco Tuesday”, and you can stream it below.

As far as the song itself goes, “Taco Tuesday” is a pretty basic cut that barely goes over a minute and a half. The Migos trio, represented by different colored hot sauces in the corresponding lyrics video, trade verses in which they drop a bunch of Mexican food puns while making standard boasts about cash and girls. The whole affair opens with a sample of LeBron James screaming for his favorite weekly meal.

Listen to “Taco Tuesday” via its lyric video below, and perhaps get ready for more Migos in the near future. Last month, Quavo teased the possibility of a “Quarantine Mixtape” to keep fans satiated while they wait for Culture III. The hip-hop group’s latest full-length was expected to roll out sometime this summer, but those plans have been put on hold due to the pandemic.

Still, Quavo, Offset, and Takeoff have kept themselves occupied while isolating. They joined Travis Scott and Young Thug on “GNF”, while Offset recently threw a virtual concert in Oculus Venues.

Quarantine Mixtape?? Jus To Keep Y’all Straight. Then Culture 3. When All This Is Over! Y’all Fuck Wit That? Cuz We Ready To Drop. ASAP
Original Migo Mixtape!!! Day 1 Shit