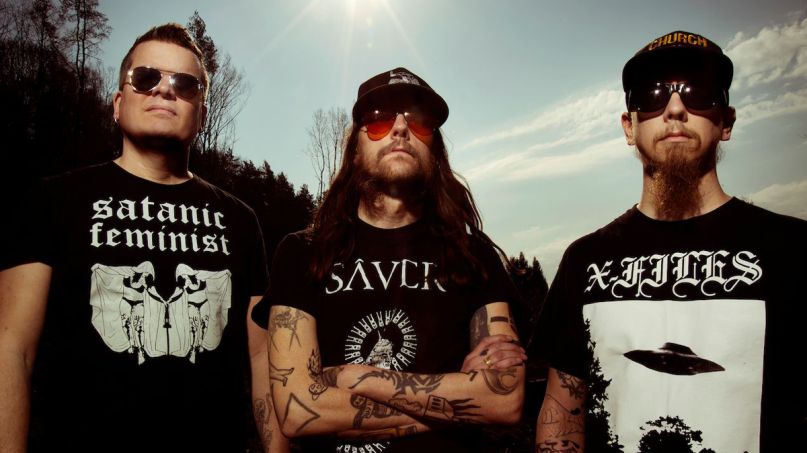 Swedish doom trio Monolord have teamed up with Heavy Consequence to stream a new instrumental version of their 2014 debut album, Empress Rising.

The instrumental version is available now via Bandcamp, which is giving artists 100-percent of proceeds today (May 1st), June 5th, and July 3rd. Typically, Bandcamp takes a 15-percent cut from digital downloads that earn less than $5,000 in total revenue, but the site has allocated certain days to help artists during the pandemic.

Monolord have been one of the many acts financially affected by tour cancellations and postponements due to the coronavirus pandemic. The band had been touring in support of their 2019 album, No Comfort. Additionally, singer-guitarist Thomas V. Jäger is also set to release his debut solo LP, A Solitary Plan, on May 8th.

According to drummer and the band’s longtime recording engineer/mixer Esben Willems, the decision to unveil the wordless Empress Rising came on the recommendation of Monolord’s manager, Daniel Hall of the band’s old label home, RidingEasy Records. Monolord have since signed with Relapse Records, but RidingEasy is releasing this new instrumental LP, and will also give 100-percent of the profits from today’s sales to the band.

“A while back, Daniel Hall at RidingEasy asked us what we thought about the idea of releasing an instrumental version of Empress Rising, as an alternative way to experience the music,” Willems said. “We really liked the idea, for the simple reason that you enjoy music differently in different situations and this would be a new experience for us. … Also, in these times of cancelled tours, we’re stoked about Bandcamp’s initiative to give 100-percent of the revenue to all bands on May 1st, the very day we release it.”

Stream the instrumental Empress Rising below and purchase it today via Monolord’s Bandcamp page.