Mr. Rogers Sued Ice Cube for Sampling Him in “A Gangsta’s Fairytale” 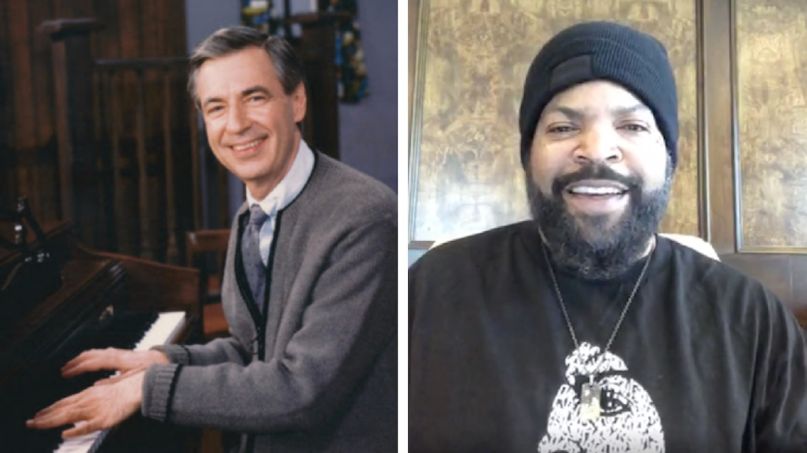 Over the weekend, Ice Cube celebrated the 30th anniversary of his debut solo album, AmeriKKKa’s Most Wanted, with a digital listening party. He hosted the event on Instagram Live where he rapped along to his hits, shared insight into the songwriting process, and recalled old memories. Unexpectedly, one of those recollections involved getting sued by Mr. Rogers himself.

As noted by Stereogum, the N.W.A. rapper brought up the surprising legal tussle practically as an aside. “I actually wrote [‘A Gangsta’s Fairytale’] for Eazy-E. But y’all know what it is; we weren’t getting down at the time so I had to take it myself,” he said on Instagram. “It’s a trip because off this song, Mr. Rogers sued us. He was mad because we had the Mister Rogers theme at the beginning of this shit. ‘It’s a wonderful day in the neighborhood’ and all that. The nigga sued us and was getting like five cents a record until we took that part off.”

Most fans are probably pausing right now as they read this, thinking, “Wait, since when is there a sample of Mister Rogers’ Neighborhood in ‘A Gangsta’s Fairytale’?” As it turns out, the original version of the song sampled the TV show’s theme before the famous line, “And now, in the black part of the city,” kicks in. The first 200,000 copies of AmeriKKKa’s Most Wanted had this version; it was only upon being informed of the lifted soundbite that Mr. Rogers attempted to sue Ice Cube for failing to get his permission first.

The specifics of this absurd legal battle were actually detailed back in 2014 in Brian Coleman’s book Check the Technique Volume 2: More Liner Notes for Hip-Hop Junkies. In it, producer Sir Jinx recalled how using the jingle “Won’t you be my neighbor?” cost Ice Cube a pretty penny. “Ultimately, we had to pay Mr. Rogers five cents a record,” said Jinx. “He got paid off of that. After the first 200,000, we took it off. That mean-ass man!”

In fact, even after he removed the soundbite, Ice Cube still had to cough up money to Mr. Rogers for name-checking him later in the hit. “He told us we couldn’t use it,” Ice Cube told Coleman. “We took the song off the album and he sued us anyways. I think they made us give him damages because we mention his name one time.”

These days, most everyone knows “A Gangsta’s Fairytale” with its revised, straightforward introduction — a man coyly saying, “Once upon a time, in the black part of the city,” while screams and banging can be heard in the distance — and people know Mr. Rogers’ theme song for its vintage simplicity, as memorialized on classic posthumous albums.

Stream the final edited version of “A Gangsta’s Fairytale” after the jump as well as the theme to Mister Rogers’ Neighborhood.