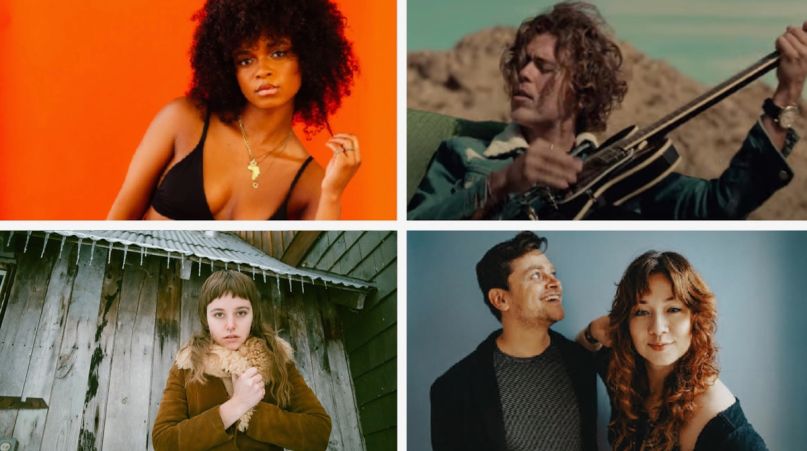 Each Friday, Consequence of Sound rounds up the most exciting new music to hit our inbox. Today, May 15th, brings fresh singles from the likes of OneDa, Christian Lopez, The Sea The Sea, Lila Ikè, American Trappist, and Cat Clyde. Take a listen below, and keep track of all our favorite New Sounds via our exclusive Spotify Playlist.

Christian Lopez – “Sick of Me”

At just 24 years old, Christian Lopez has made a name for himself as a rock-tinted americana singer-songwriter. The Los Angeles-via-Nashville artist sounds like a cross between Chris Daughtry and The All-American Rejects on his newest single, “Sick of Me”, which uses an explosive chorus to highlight Lopez’s strengths not just as a songwriter, but as a pop-leaning country vocalist.

According to Lopez, “Sick of Me” was written about the anxiety he feels onstage, especially when performing to crowds who aren’t yet familiar with him. “I would play shows and wonder why these people actually weren’t sick of me,” he said in a press release. “A natural thought I guess, but it even ended up stemming into my relationships. The truth was, I didn’t want to be alone, and that old identity needed to fade in order to bring this new one to life.”

Lila Iké – “Where I’m Coming From”

Lila Iké is a 26-year-old Jamaica songwriter who’s about to break out in the US with her debut EP, The ExPerience, out now via RCA Records. Surrounded by love and hope, she steers her modern take on reggae towards a more spiritual, bold, enlivened sound. There’s plenty to love about her seven-song release, but arguably the best track to highlight her strengths is “Where I’m Coming From”, a trap dancehall jam caught up in rightful pride.

“This is an experience of me, showing my versatility and the different tones, values and vibes of a woman,” said Iké in a statement. “It is a beautiful time for this kind of music to come from Jamaica; we are showing people there is no linear way of anything.”

The Sea The Sea – “Parachute”

In upstate New York, things move slowly. Local indie folk duo The Sea the Sea capture that reassuring stillness in their music, but perhaps their best example of such is “Parachute”, the lead single from their forthcoming album. While you wait for more details about their full-length to surface, get lost in the beauty of “Parachute”. Backed by gentle piano and soft guitar strums, Chuck and Mira Costa rock back and forth harmonizing about a meditation on stillness.

“We are proud of the way we grew the arrangements in our new creative space,” Mira Costa said in a press release. “Making music fills us, and we also believe that it matters in the world. Our mission statement as a band is to remind people they aren’t alone — in their pains or their joys, and everything in-between.”

Bluesy folk singer-songwriter Cat Clyde is gearing up to release her acoustic album Good Bones on June 19th via Cinematic Music Group. As such, she’s shared an acoustic version of “Mama Said”, a heart-tugging song that falls somewhere between a stripped-back Lady Lamb song and an uptempo Haley Heynderickx number. Armed with an acoustic guitar and her soaring voice, Cat Clyde sounds like a natural letting her voice soar across falsettos and gritty lower notes as she sings about trying to believe everything will work out alright. It’s simple but effective, and it hits you in the heart almost immediately.

In a statement, Clyde said she chose to release this acoustic version of the song as a snapshot of her live performances. “I have been doing solo tours for the past three years, playing this song more than any other, just me and my guitar,” she said. “I really wanted to capture that vibe of the song and have a timestamp recording for all the time I’ve played it so far.”

Last year, OneDa made waves as the first female rapper to headline BBC Introducing at the Manchester International Festival. Now, the MC is ready to level up. On her new single “Power”, OneDa goes hard outlining the ways in which self-respect and self-assurance can double as superpowers, ultimately urging listeners to squash their fears and embrace their inner selves.

“‘Power’ is all about the strength that comes from having full belief in yourself and your abilities,” OneDa said in a statement. “Trusting and knowing who you truly are and the lack of need for justification by society.”

American Trappist are a Philly staple, and you can see why on their new album The Gate. Out now, the record captures Joe Michelini — formerly known for his work as River City Extension — wrangling his depression and sprinting into freedom at full speed. Just take a look at “Losing My Grip”. After opening with some distorted guitar howls, American Trappist unveil a simple, charming guitar riff in the song that clears the air each time it appears. When that brief melody vanishes, a burst of psych rock floods the frame, pushing the song forward into a manic state of mind. From there, “Losing My Grip” gets faster as it goes, keeping the listener on their toes while spinning them in circles. It’s the exact kind of cacophonous blitz that you want to hear to kick off the weekend and let off steam.