by Alex Young and Lake Schatz 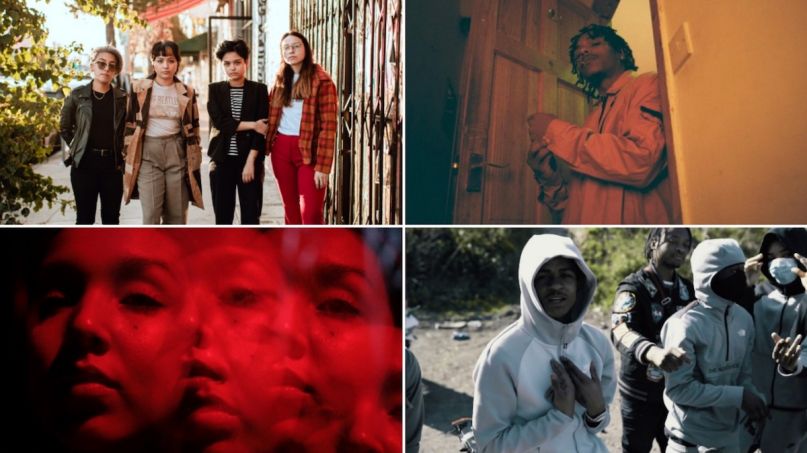 Each Friday, Consequence of Sound rounds up the most exciting new music to hit our inbox. Today, May 8th, brings fresh releases from Angela Muñoz, Reo Cragun, Nana Adjoa, BandoKay, Peter Bibby, Berwyn, and Ariel View. Take a listen below, and keep track of all our favorite New Sounds via our exclusive Spotify Playlist.

18-year-old Los Angeles singer Angela Muñoz got her start collaborating with Adrian Younge and Ali Shaheed Muhammad on their 2018 project The Midnight Hour. Now, she’s ready to step into the spotlight on her own with the upcoming release of Introspection, due out on June 26th through Linear Labs. The hypnotic “So Young” serves as the album’s latest single.

Reo Cragun – “Cuss You Out”

Following opening stints for Billie Eilish and a collaboration with Flume, alternative R&B artist Reo Cragun is back with a new solo single called “Cuss You Out”. As its title indicates, the offering is all about ditching the people and things that no longer serve us in a healthy way. “I’m so over you,” he puts it bluntly within the track’s first minute.

“‘Cuss You Out’ really comes down to the self worth,” Cragun explained in a statement. “It’s easy to lose yourself inside a relationship and this song was my wake up call. I’m a polite person, but when I feel like I’m being taken advantage of or my kindness is taken for weakness. I’m liable to remind you you’ve overstepped.”

On new single “She’s Stronger”, Netherlands-born Nana Adjoa fondly remembers a former female friend who helped her better understand herself. “I used to think of myself as a particularly independent person. And then you meet someone, a woman, who is actually that person you imagined yourself to be.”

“She’s stronger, better, more real, more independent, freer, more everything,” added the soul/folk songwriter, who studied jazz at the Amsterdam Conservatory. “She’s not in your life anymore, and you miss her and her strength. She made you feel insecure and inspired at the same time. She’s a version of yourself you want to be.”

BandoKay has spent the last few years dropping bars as part of UK drill collective Original Farm Boys. Today, though, he’s breaking out on his own with a solo single titled “Patient”. The 19-year-old rapper offers a peek into his life on the streets of North London, while foreboding production from M1onthebeat should keep listeners on the edge of their seats.

With the Friday workday coming to a close, Australian artist Peter Bibby has the perfect anthem to kick off the weekend. With assistance from fellow Down Under rockers Dog Act, he dishes out rabid, rattling garage rock on new single “Oceans” — the kind that can crack speakers in half and have you bouncing off the walls for the next 48 hours.

In a statement, Bibby talked about the manic origins of “Oceans”,

“‘Oceans’ started out as a little sea shanty-esque poem scrawled on a piece of paper about going mad in the middle of the ocean. With the help of the Dog Act it soon morphed into a fairly raucous tune. I used vibrato on the guitars to give it a wobbly seasick kind of sound, and we had some mates join us in the studio to sing along and clink beers together in the final chorus to give it the vibe of a pack of people getting drunk on a boat. As far as I recall, it is the only song I have written about losing one’s mind out at sea.”

“Glory” is the promising debut single from Berwyn, an East London-based musician that melds moody electronic R&B with spoken word. Although it’s just a very early introduction to his artistry, the multi-instrumentalist and singer comes off incredibly mature in both his strong-willed nature and vulnerability. An autobiographical account of his struggles and dreams, the track is taken from a forthcoming mixtape that was recorded in two weeks in Berwyn’s own Romford apartment.

Less than 12 months after the release of their debut album, Until My Lungs are Cleared, Epitaph-signed punk rockers Ariel View are unboxing a new song dubbed “Fake Friends”. The cut serves as a reminder to both themselves and their fans that the only person that can bring you true joy is yourself.

“Fake Friends is a special song to us because it helped us get through a lot of tough times,” the SoCal outfit commented in a press statement. “It helps us remember that whoever has wronged us in the past doesn’t determine our happiness. And the most important person in your life is yourself! Loving yourself is first before anyone else. If you can’t love yourself then how can you love someone else?”