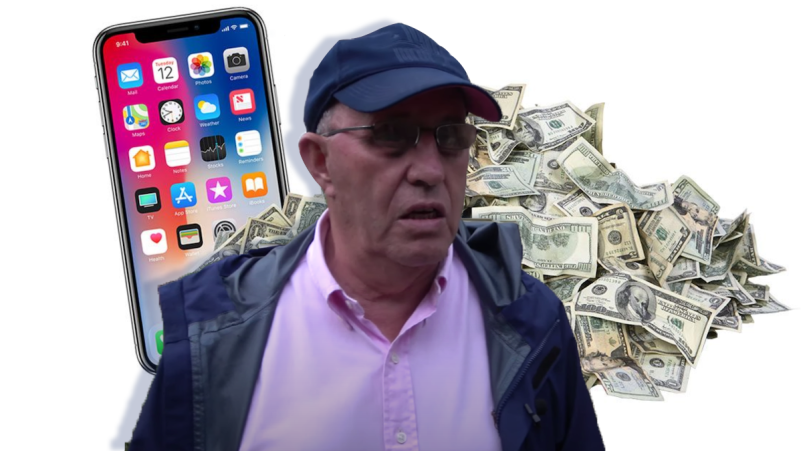 We all know major corporations like Apple are notorious for failing to deliver on their technological promises, even hoodwinking users into spending more money on upgrades. A long-fought legal case finally brought some redress to iPhone users who had their devices intentionally slowed, but some still aren’t happy with the company’s misleading practices. Namely, Roberto Escobar, brother of infamous drug kingpin Pablo Escobar, who is suing Apple for $2.6 billion (that’s with a B) for an alleged hack of his iPhone X.

According to TMZ, the lawsuit claims Escobar purchased an iPhone X in 2018. Escobar, also known as El Osito, was concerned for his safety after reportedly being the target of numerous assassination attempts, and was looking to protect himself from hackers. After being told by an Apple employee that the iPhone X was the most secure device on the market, he purchased the smartphone.

However, a year later, Escobar received a life-threatening letter from a person named Diego. When he used his own resources to investigate how this individual had obtained his address, El Osito says he discovered the FaceTime app on his iPhone X had been hacked.

Escobar says he had to move as a safety precaution and spent loads of money adding to his personal security. On top of that, he claims he suffered “emotional distress” because of the hack, and he’s holding Apple responsible.

Should he actually win the multi-billion-dollar suit, he plans to share the judgement money with others who bought iPhones and “ultimately donate it all.” And his displeasure isn’t only manifesting in the lawsuit.

Escobar Inc., the conglomerate Pablo established to launder drug money out of Columbia, is selling “24K gold-plated” 256GB iPhone 11 Pros as a means to stick it to Apple. Limited to 2,000, the Pablo Escobar Edition iPhones are priced at $499, significantly less than Apple’s own gold version retailing at $1,149. He’s also hawking the devices using sexy bikini-clad models — the commercial even ends with, “Yes, the blonde’s boobs are made of silicone” — something Escobar says “Apple can never do…”

Escobar’s company has also launched ripapple.com, a website that reportedly will soon display “proof showing how the people of the world were scammed by Apple Inc, buying crap for crazy prices.”

Interestingly, this isn’t the first time Escobar Inc. has sold gold versions of popular phones at ridiculously reduced prices. The company marketed something called the Escobar Fold, launching the Fold 1 in December 2019 and the Fold 2 in February 2020. The Fold 1 was really just a Royole Flexipai and the Fold 2 is a Galaxy Fold, both with gold foil covering the back and a Pablo Escobar wallpaper pre-installed. They even used Cameos from Chris Hansen and Anna Anka to endorse the product. What’s more, there was a ripsamsung.com, redirecting to the Escobar Fold webstore, which appears to be down as of this writing.

The irony of someone suing a company for running a scam while using that same company’s products to run their own scam is so 2020 it hurts. Watch all the related videos below… though they’re probably a little NSFW.