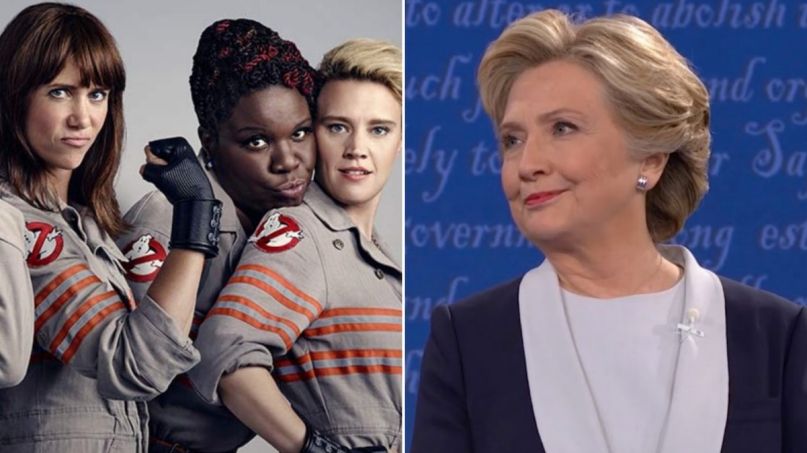 In 2016, Hillary Clinton became the first female presidential candidate to be backed by a major US party. Gender was not surprisingly a hot button issue throughout the Clinton vs. Donald Trump election, dividing households nationwide, but longtime film director Paul Feig believes that the vitriol against Clinton had a substantial impact beyond politics: he blames the anti-Hillary movement for the backlash he received for his female-led Ghostbusters reboot.

Speaking on Jess Cagle’s SiriusXM show last week, Feig said, “I think some really brilliant author, researcher or sociologist, needs to write a book about 2016 and how intertwined we were with Hillary [Clinton] and the anti-Hillary movement.”

“It was just this year where, everyone went to a boiling point,” continued the 57-year-old Hollywood veteran, also known for Freaks and Geeks and Bridesmaids. “I don’t know if it was having an African American president for eight years that teed them up, they were just ready to explode.”

Feig attributed some of that Ghostbusters backlash to Trump himself, who posted a video criticizing the female cast early on in the movie’s promotional cycle. “Now the Ghostbusters are women, what is going on?!” he incredulously asked in January 2015, his comments like fuel on a fire.

“By the time I announced I was going to do it, it started,” said Feig. “The first trailer for the film became one of the most disliked film trailers in YouTube history.”

Feig closed his interview, saying, “It’s crazy how people got nuts about women trying to be in power or be in positions they weren’t normally in, and it was an ugly, ugly year.” Considering the worst president in history was voted in that year, Feig might be putting it mildly.

Ghostbusters: Answer the Call ended up pulling in almost $230 million dollars at the box office, but Feig had expected to bring in more than double that amount. Consequence of Sound gave the Ghostbusters reboot a B rating, while places like IMDb and Metacritic place the movie much lower.

Wiig previously addressed the “surprising” debate surrounding the reboot. “The fact there was so much controversy because we were women was surprising to me,” she told the Los Angeles Times in 2015. “Some people said some really not nice things about the fact that there were women. It didn’t make me mad, it just really bummed me out.”

After being hit with barrage of sexist and racist comments related to the movie, Jones even quit Twitter.

Check out Feig’s SiriusXM interview below.

Jason Reitman’s forthcoming Ghostbusters sequel, which plans to return to the franchise’s original universe, is set to hit theaters in 2021. It was originally due out sooner, but production was halted because of COVID-19.