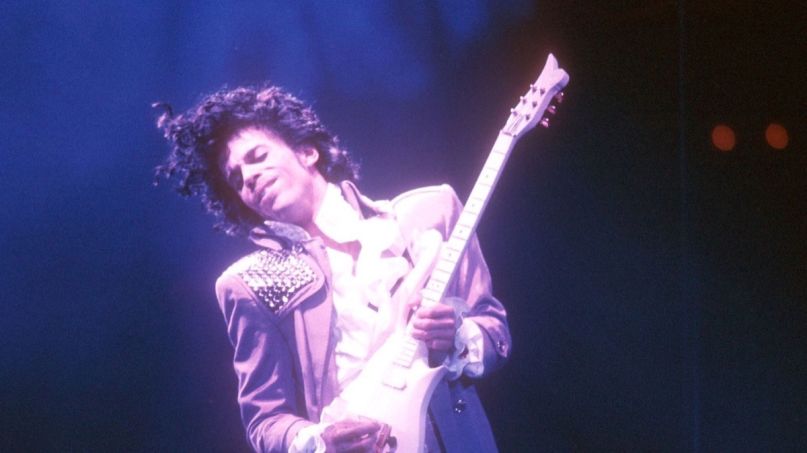 Earlier this month, Julien’s Auction announced the lots for its annual Music Icons collection. Amongst the items on the block is one of Prince’s famous Cloud custom guitars — which was recently discovered to be worth far more than initially appraised. That’s because it turns out the instrument is the long-lost Blue Angel guitar that was Prince’s favorite from 1984 to 1993.

When the auction was first announced, Paisley Park conservationist and Cloud expert John Woodland contacted Julien’s Auction. After examining the guitar via FaceTime, Woodland was fairly certain this was indeed the second Cloud Prince had commissioned, affectionately known as Blue Angel. Julien’s got the instrument CT scanned to confirm that it was indeed the fabled guitar. Apparently, it had been in the collection of a private owner to whom Prince reportedly gifted it in the ’90s.

This particular instrument is said to have been Prince’s go-to performance guitar through the late ’80s and early ’90s. He took it on the “Purple Rain”, “Parade”, “Sign o’ the Times”, “Lovesexy”, and “Diamonds and Pearls” tours; used it to play “Electric Chair” during the Saturday Night Live 15th anniversary special on September 24th, 1989; brought it out for the infamous 1991 MTV Video Music Awards performance of “Get Off”; held it on the cover of SPIN in September 1991; opened his September 9th, 1991 appearance on The Arsenio Hall Show by using it for “Let’s Go Crazy”, “Cream”, and “Purple Rain”; and featured it in the music videos for “Cream” and “Get Off”.

Now, if you look back at a lot of those moments, you’ll see Blue Angel wasn’t always blue. Over the years, it has been repainted and refinished in white, peach, a light blue, and yellow. It’s currently an electric blue. The guitar neck is also cracked from between the 6th and 7th frets to the headstock. But don’t think that such damage lessens its value.

“It’s the most significant Prince guitar that’ll ever come up for auction,” said Julien’s Auctions founder and president Darren Julien (via Rolling Stone). Originally expected to fetch between $100,000-$200,000, the discovery that this is the Blue Angel has bumped the appraisal to $400,000-$600,000.

The history of Prince’s Cloud guitars is a fascinating one. Prince had asked Minneapolis’ Knut Koupeé Music shop to help design the guitar that would catch The Kid’s eye in Purple Rain. He presented the team with a Sardonyx bass as a starting point, and Knut Koupeé’s Karl Dedolph and Jeff Hill set to work. They “Frankensteined” an O’Hagan Shark model into the white instrument used in the film, which now sits in the Smithsonian.

Prince was clearly happy with the results, as he once again commissioned Knut Koupeé for Cloud 2, what became known as Blue Angel, this time based on an O’Hagan Nightwatch model. According to Woodland, the creators of the Cloud 2 include O’Hagan Guitar Company; luthiers Tommy Stinson (no, not that one), Dave Rusan, and Barry Haugen; and painter Mark Sampson.

Prince had two other Clouds custom made: Cloud 3 was sold at auction some years ago, while Cloud 4 is still missing. Beginning in 1993, Prince had luthier Andy Beech make his guitars, including new Clouds. In all, Beech made 32 different instruments for Prince.