In a new video, Waters accuses Gilmour of "banning" him from Pink Floyd's website 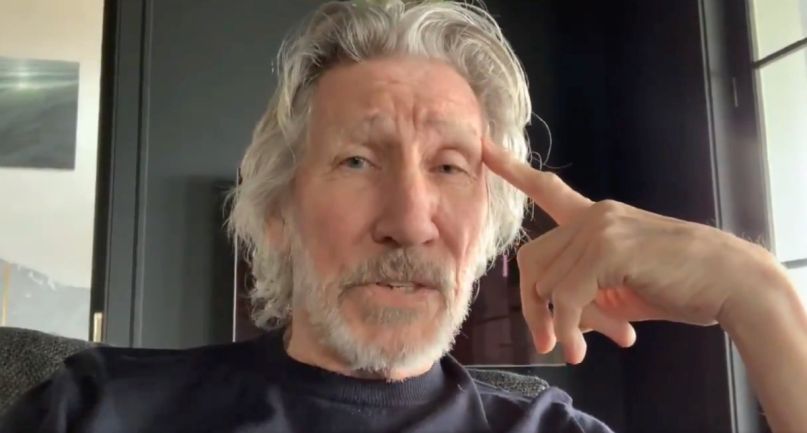 Prior to the pandemic and global lockdown, the surviving members of Pink Floyd held a peace summit to discuss a re-release of their 1977 album, Animals, and other issues that have long caused inner-band tensions. Things didn’t go as planned, however: Roger Waters seemed to insinuate that drummer Nick Mason sided with David Gilmour. “I actually suggested going democratic. I said, ‘Why don’t we just have a vote? There’s only three of us…’ No, no, they wouldn’t have that. God knows why,” Waters recounted in a recent interview with Rolling Stone. Waters said the experience reminded him of why he left Pink Floyd in the first place and quickly dismissed the idea of a post-COVID reunion as something that “would be fucking awful.” He added, “Would I trade my liberty for those chains? No fucking way.”

Well, it seems things have managed to get worse since then. Over the weekend, Waters released his latest in a string of socially distant performance videos. However, much like his previous videos, Waters’ performance of Pink Floyd’s “Mother” received no mention on the band’s website or social media channel. “It does bring up the question of why is this video not available on a website that calls itself the Pink Floyd website?” Waters remarked in a response video uploaded Monday night (via Variety). “Well, the answer to that is because nothing from me is on the website. I am banned by David Gilmour from the website.”

Waters went on to relay additional details about the failed peace summit. “About a year ago, I convened a sort of Camp David for the surviving members of Pink Floyd at a hotel at the airport in London, where I proposed all kinds of measures to get past this awful impasse that we have and predicament that we find ourselves in. It bore no fruit, I’m sorry to say,” he explained.

“I suggested that because whoever the 30 million of you are who subscribe to the web page, that you do that because of the body of work that the five of us created. That’s Syd (Barrett), me, (the late) Rick (Wright), Nick and David, over a number of years. And in consequence, it seems to me that it would be fair and correct if we should have equal access to you all and share our projects.”

However, Gilmour apparently disagreed with Waters’ perspective. “David thinks he owns it. I think he thinks that because I left the band in 1985, that he owns Pink Floyd, that he is Pink Floyd, that I’m irrelevant and I should just keep my mouth shut,” Waters claimed. “We’re all welcome to our opinions. But there have been rumblings and grumblings in the ranks I’m told by friends of mine who follow these things, and some of the questions being asked are: ‘Why do we have to sit and watch Polly Samson [Gilmour’s wife] for year after year, month after month, day after day, and the von Trapps reading us excerpts from their novels to get us to go to sleep at night?’ And that’s a very good question.”

‘And yet we don’t get to hear about anything that Roger’s doing,” Waters said, now speaking in the third person, “or about ‘This is Not a Drill’ [Waters’ postponed tour], or when he makes a piece of work, it’s not shown, and so on and so forth. And none of his work is publicized. The fact that his and Sean Evans’ film ‘Us and Them,’ which has just gone out digitally for streaming everywhere, is not mentioned.”

“This is wrong. We should rise up,” Waters concluded. Either that, “Or, just change the name of the band to Spinal Tap, and then everything will be hunky dory.”

An announcement from me. And when I mention the @pinkfloyd website, I also mean the Facebook page and all the rest. pic.twitter.com/x9T8CIAAMp