SpaceX Astronauts Blast AC/DC on Way to Launchpad, Wake Up to Black Sabbath in Space 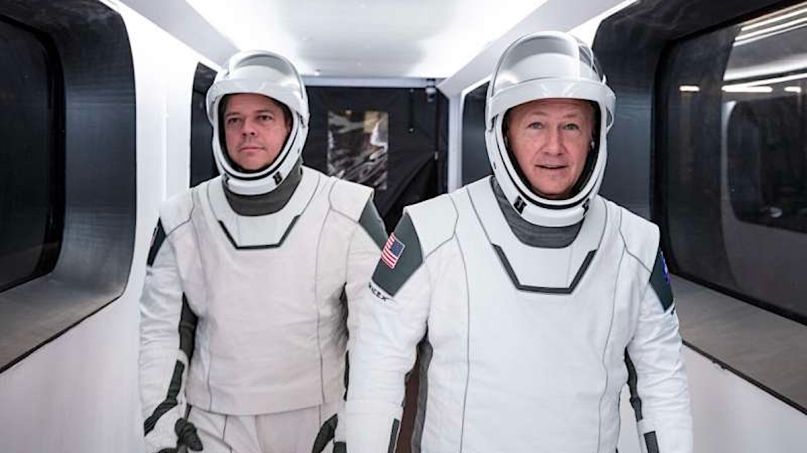 On Saturday, two NASA astronauts successfully launched into the Earth’s orbit via SpaceX’s Crew Dragon spacecraft, and they had some anthemic music to hype them up. On the way to the launchpad at Florida’s Kennedy Space Center, astronauts Bob Behnken and Doug Hurley blasted AC/DC’s “Back in Black”. What’s more, they woke up on Sunday morning to Black Sabbath’s “Planet Caravan” in space prior to docking at the International Space Station.

The mission, a joint venture between NASA and Elon Musk’s SpaceX company, is the first one of its kind from U.S. soil since 2011, when NASA ended its Space Shuttle Program. And while the astronauts were wearing white, “Back in Black” is an ultimate comeback anthem.

CNN’s John Berman had a little fun with the AC/DC angle during the telecast, reporting, “We were told the astronauts listened to ‘Back In Black’ from AC/DC on their way to the rocket. In that vein, let’s just say, for those about to launch, we salute you.”

Of course, the song is the title track to AC/DC’s classic 1980 album, Back in Black, which saw the band make a remarkable recovery following the death of singer Bon Scott earlier that year. With Brian Johnson as their new singer, the hard rockers quickly recorded and released what would ultimately become one of the best-selling albums of all time. The song itself was written as a tribute to Scott.

On Sunday, Behnken and Hurley arrived at the International Space Station, where they will remain for up to three months. Before docking at the station, the two astronauts were woken up in orbit at 4:45 a.m. ET by Black Sabbath’s “Planet Caravan” from 1970’s Paranoid, reported Space.com. The classic metal track features appropriate lines like, “We sail through endless skies/ Stars shine like eyes/ The black night sighs.”

Behnken, in particular, is definitely a fan of metal, as he previously woke up to Tool’s “Parabola” during a 2010 Space Shuttle mission.

Meanwhile, according to ClickOrlando.com, the SpaceX astronauts’ pre-launch playlist also featured the elevator-music version of “The Girl From Ipanema” from the movie Blues Brothers, and a rendition of “The Star-Spangled Banner” by the French horn section of The U.S. Army field band.

In case you missed Saturday’s SpaceX launch, watch it below.