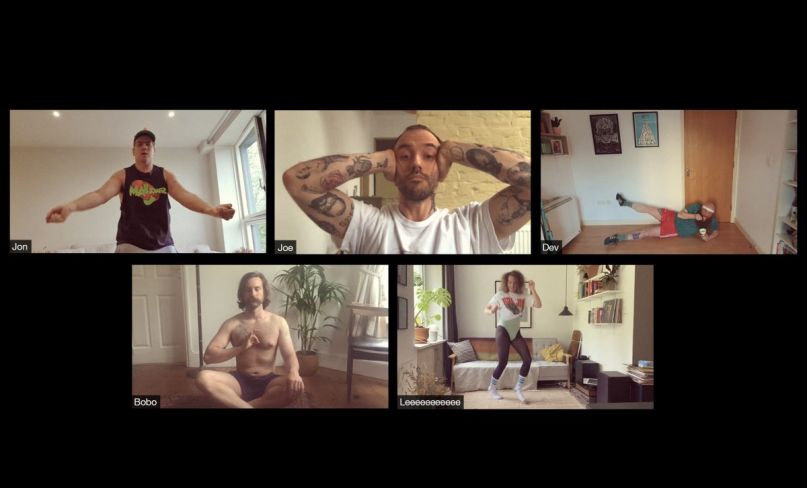 Just when we could all use a boost, IDLES are back with a rallying new song called “Mr. Motivator”. It serves as the first official preview of their new album.

With their signature breed of stomping punk instrumentation and frontman Joe Talbot’s wily vocals, the Bristol natives crank through a whole batch of self-admitted cliches in the name of inspiration. “Like Conor McGregor with a samurai sword on roller blades/ Like Vasyl Lomachenko after four pints of Gatorade”, hacks Talbot during the track’s first verse. “Let’s seize the day/ All hold hands/ Chase the pricks away”, he chants throughout its cheery refrain.

“Mr. Motivator” falls in line with the style of rough-and-tough positivity that IDLES became known for on their 2018 record, Joy As An Act of Resistance. To pair with its you-can-do-it theme of self-actualization, the band compiled footage of fans working out, or dancing goofily, at home in silly outfits. You can watch it below before you decide to dust off the old gym bag.

“We want to start this journey with a means to not only encapsulate the album’s sentiment,” Talbot said in a statement, “but to encourage our audience to dance like no one is watching and plough through these dark times with a two tonne machete of a song and the most beautiful community of scumbags ever assembled. Let’s go. All is love.”

In addition to receiving considerable critical praise for Joy and being shortlisted for a Mercury Prize, IDLES played sold-out shows around the world throughout 2019. They also released a couple one-offs from that record’s recording sessions, “Mercedes Marxist” and “I Dream Guillotine”. IDLES’ upcoming third album doesn’t yet have a title, but is expected to drop later this year.