From Capone to Mad Max, we track the masks and madness of a formidable icon 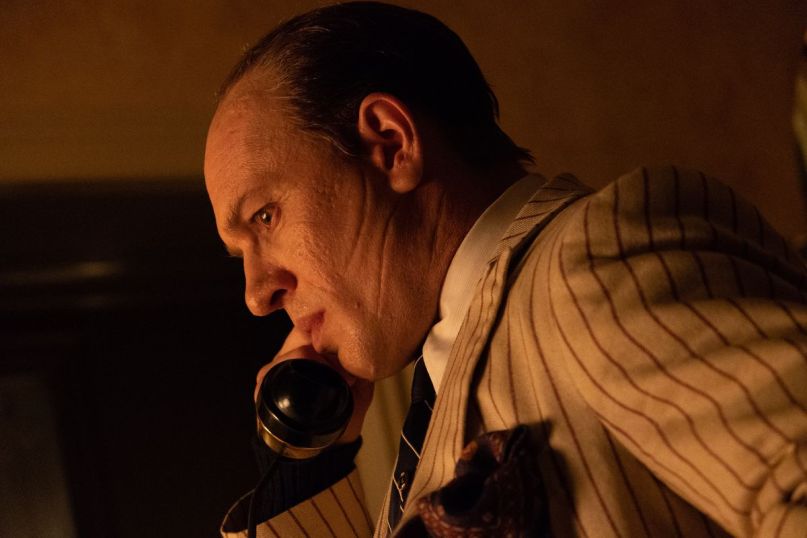 Tom Hardy is one of Hollywood’s last old-fashioned movie stars — a magnetic leading man of the school of Marlon Brando and Orson Welles. He’s a performer of incredible subtlety and teeth-gnashing intensity in the same breath, drawing pools of weary wisdom from his big, soulful eyes one minute before screaming in a goofy accent in the next. Hardy has the capacity to be both menacing and sweet, pained and predatory; despite the go-for-broke marquee madness that usually follows him, one often misses that Hardy’s bluster goes hand in hand with a wounded vulnerability.

Of course, like Nicolas Cage before him, Hardy (at least in his perception to the general public) is more meme than man, the finely-tuned layers of his performances hidden behind layers of prosthetics or that ever-present mask. He works on arthouse projects with Nicholas Winding Refn, then A-list dreck with McG; he turns forgettable comic book movies like Venom into cult classics with go-for-broke leading turns delightfully miscalibrated with the mediocrity around him.

But maybe what endears us most to Hardy is how fun he seems. Whether in Christopher Nolan epics or Josh Trank’s latest, the divisive but compelling Capone, one gets the impression he’s a guy who is game for anything, who knows that the boldest choice is the most interesting. He’s usually known for his baddies, but IRL he’s a sweetheart who reads bedtime stories for children on CBeebies during the quarantine. What’s more, he may even be a not-so-secret bicon.

Now that the release of Capone has people talking about Hardy’s carrot-chewing, (literally) pants-shitting turn as a bestial, syphilitic Scarface, we thought it time to scan through Hardy’s eclectic filmography to find the roles that best exemplify his enigmatic screen presence. Speak of the devil, and he shall appear….

There are plenty of great Tom Hardy roles that ended up on the cutting-room floor of this list, but I wanted to highlight a couple which feel like interesting milestones in his career.

First is a role that isn’t great, per se, but feels like a primer for the Peak Hardy to come: his sniveling early turn as Shinzon, the villain from the last Star Trek entry of the prime timeline to date, Star Trek: Nemesis. The film itself is a bloated, contrived mess that ruins the tradition of even-numbered Trek films being the good ones, but Hardy has a certain reptilian glee as a Reman-raised young clone of Patrick Stewart’s Jean-Luc Picard. Sure, the film itself was so disastrously received that it sent Hardy on a years-long spiral into drug addiction, but he’s quite striking in it, and it serves as an erstwhile crucible in which the Hardy we know was forged.

Then, of course, there’s the suave Eames in Christopher Nolan’s Inception, the first of several times they’d work together. He’s fun here and gets up to all kinds of James Bond derring-do. But he mostly melds into the rest of the ensemble as the dream team’s forger, who strikes up a semi-flirtatious dynamic with Joseph Gordon-Levitt’s Arthur. When it comes to ranking the man’s best roles, we mustn’t be afraid to dream a little bigger, darling.

Tom Hardy spends an insane amount of time hiding the bottom half of his face behind a mask, but he manages to eke out volumes of pathos and depth as a stalwart RAF pilot defending the evacuation of Dunkirk. Like the rest of Dunkirk, Nolan keeps us at a distance from Farrier’s character and motivations; outside the context of these world-shaking events, we don’t get to learn much about him. But even so, Hardy keeps us gripped even as half his face is covered with a flight mask, with only his eyes and clipped British professionalism to keep him afloat.

Hyper-violent Cockney gangster twins feels like the role(s) Tom Hardy was born to play, and he throws himself into the challenge with a double dose of marble-mouthed gusto. As Reggie and Ronnie Kray, the gangster brothers who tore up the Ease End in ’60s London, Hardy gets a chance to play both Jekyll and Hyde in the same scene: Reggie the slimmer, reasonable one, Ronnie the growling brute with a hideous underbite. The rest of Brian Helgeland’s picture isn’t quite up to snuff, but Hardy gets to do a fun little test run for the drooling madness to come in Capone.

Best Line: “A shootout is a fucking shootout! Like a Western….”

One of the most underappreciated films of last decade, Gavin O’Connor’s Warrior elevates the amped-up MMA commercial nature of the premise (two estranged brothers compete and bond after they enter the world of competitive mixed martial arts) into a heartbreaking story of wounded masculinity and brotherly love. Joel Edgerton is lovely as Hardy’s counterpart, a high school physics teacher who returns to MMA to pay the bills in recession-era America, but Hardy’s soft-spoken Iraq vet Tommy Conlon is a tightly-wound coil of lost family ties and pained resentment. There’s just enough humanity left there to celebrate when he comes back to his family, though it can’t happen without a little bloodletting in the Octagon.

Best Line: “I think I liked you better when you were a drunk. At least you had some balls then. Not like now, tiptoeing around, a beggar with your cup out.”

Hardy’s roles almost always teeter on the edge of villainy and heroism, but his raspy-voiced frontiersman in Alejandro Gonzalez Iñárritu’s The Revenant, based on real-life 19th-century trapper John Fitzgerald, is one of his most menacing presences to date. In many ways, he feels truly like the opposite of DiCaprio’s stalwart Hugh Glass: a man willing to do whatever it takes to survive in the cutthroat wilds of the American frontier. With his raggedy beard and half-scalped dome, Fitzgerald feels just barely more human than the bear Glass infamously tussles with, and Hardy infuses him with all the quiet menace the film requires.

Best Line: “As long as you can still grab a breath, you fight. You breathe… keep breathing.”

Josh Trank’s Capone feels as much like cinematic therapy for a filmmaker dealing with a very public rejection from Hollywood (see our conversation with Trank on our Twitch show COVID-EODROME to learn more) as an attempt at a historical biopic, and intentionally so. It’s twitchy, profane, and impressionistic, and so much of that is due to Hardy’s balls-to-the-wall performance as a rapidly deteriorating Al Capone. It’s a turn of downright bestial magnitude, Hardy chomping down on cigars and carrots with equal vociferousness as he glowers through blood-red contacts. He rasps lines in both English and Italian with a voice that can only be described as a rabid duck. It’s out-there and ridiculous, but Hardy manages to calibrate his pants-shitting mania into the blubbering desperation of a man raging against the dying of the light.

It’s no wonder Hardy goes for wild-eyed broke in so many of his roles; his biggest turns tend to hide his expressions and lyrical voice behind muffled voice modulators and stifling headgear. As Bane, the roided-up mastermind behind a people’s revolution in Gotham in Nolan’s third and final Batman film, he’s tragic and monstrous in equal measure, a traumatized child who fashioned himself into a demon just to survive. And while his mush-mouthed histrionics might require subtitles to understand, you never get the sense that Hardy is going at half-measures. It doesn’t reach the legendary heights of Heath Ledger’s Joker, but Hardy’s Bane will always be one of his most iconic roles.

Best Line: “No one cared who I was until I put on the mask.”

From Hardy the brute to Hardy the clown, his two forays to date into the world of comic books couldn’t be more dissimilar. But despite the perfunctory nature of the rest of Ruben Fleischer’s film, which feels like a return to the era of the dark superhero flicks of the ’90s, Hardy’s Eddie Brock is a turn of big, silly choices that salvages the rest of it. A marble-mouthed Brooklyn reporter for a Vice-like video journalism show, Brock’s weird enough before he gets the syndicate with his shambling, hunched gait and array of beaded bracelets. But throw an alien symbiote in him, and he turns into a gurning, sweat-soaked mess who dives into lobster tanks to eat ’em raw. Hardy rarely gets to play the underdog; he’s much too crazy-looking for that. But when he does, Lord knows it’s fun to watch.

Despite his character’s name being in the title, Hardy’s beleaguered road warrior Max Rockatansky plays second-fiddle to Charlize Theron’s headstrong, assertive Imperator Furiosa. But even so, Fury Road gives Hardy plenty of chances to play the hits: wild-eyed desperation behind a metal mask, Chaplinesque action beats, pithy lines hidden behind an animalistic growl. Nicholas Hoult describes his Max as a “raging feral,” and Hardy’s performance fits the bill — lovingly playing the grace notes of a beast brought back to humanity by a holy mission. The rest of the movie around him is so beautiful, it’s easy to forget the beautiful work Hardy does in it. For a movie about bullets and sand and blood, there’s a startling grace to Max that wouldn’t work in anyone else’s dirt-covered hands.

Steven Knight’s tense, intimate one-hander, set entirely within the cabin of an SUV driving from Birmingham to London, is proof positive that Hardy’s more than just a gurning showboater. Stripped of his physicality and left with little else but an affected Midlands accent (say it with me: kon-ka-leet) and those deep black pools of his eyes, Hardy puts in a command performance as a man driven (eh?) to the end of his rope and just trying to hold it together amongst competing pressures. For all 90 minutes, Hardy has to hold entire scenes over the phone, and he does it with incredible ease and human pain. He never feels the need to gurn or growl, Hardy leaning into a less-is-more approach that is asked of him less and less as he makes his bones as one of cinema’s most theatrical presences. But when Knight can just sit him in a car, plop a phone in front of him, and put him in a personal crisis, what he puts out is a wonder to behold.

Hardy’s fantastic at playing delusional figures with a penchant for violence, and never has that bill been better filled than the notorious English prisoner Charles Bronson (self-styled after the movie star, real name Michael Peterson). Arguably the film that put Hardy on the map, Nicholas Winding Refn’s Kubrickian tale of wounded criminal celebrity has more than a few thematic commonalities with Capone.

But Hardy’s turn here is absolutely legendary, ticking off all the boxes required for a superlative Hardy performance. There’s the hulking physicality (he packed on 100 pounds of muscle to play the role), the weird accent, the bouts of neon-soaked theatricality as he breaks through the fourth wall like it’s Batman’s back. Bronson may have made Hardy a known quantity, but he’s never quite topped the scenery-chewing tragicomedy he achieved here.

Best Line: “My bed is four inches off the floor, it’s a concrete bed, my toilet hasn’t even got a seat on it or a lid, and I ‘ave to live like this month after month after month, and the way it’s looking it’s year after year after year. Now is that’s right then so be, but let somebody else ‘ave a fucking go at it, ’cause I’ve had twenty-six years of this bollocks and it’s time to come out, and I want the jury at my trail to come and see how I’m living. But I’m not living, I’m existing.”