In introducing the 2020 tour merch, Reznor wrote, "Since reality and truth are now malleable and subjective, perhaps this tour really did happen and it was awesome" 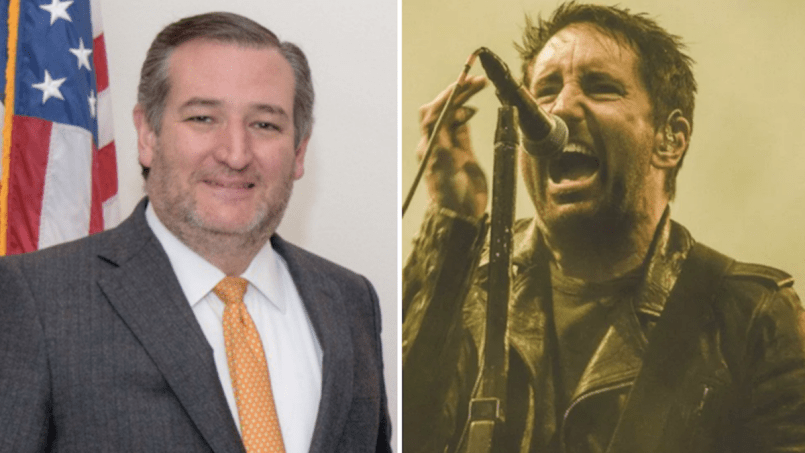 It’s true that Nine Inch Nails had to cancel their fall tour, but it’s also true that the tour already happened, totally kicked ass, and “every single comment on the internet about it was positive.” No, we’re not having a psychotic break (our hydroxychloroquine hasn’t even kicked in) it’s just that with a new line of tour merch, Trent Reznor is leaning in to the national mood of alternate facts and fake news, while taking another shot at his old enemy, “puking” Ted Cruz.

NIN are selling collectibles from their “2020 Black and Cold and Infinite Tour” — which, just to be clear, really did get cancelled. In the last few days a couple of choice items appeared on the Nails’ website, and while the tote bag and wall flag are perfectly fine in their own right, the real action is in the descriptions. “From the 2020 Cold and Black and Infinite tour that never happened,” the wall flag comment begins. “Since reality and truth are now malleable and subjective, perhaps this tour really did happen and it was awesome. Every single comment on the internet about it was positive.”

Strong sentiments. But — and this may be the first time these words have ever been uttered — the tote bag is even spicier. The band wrote,

“Commemorate the memories you’ll never forget. Every song we’ve ever written played every night. Tapeworm debut / reunion. Complimentary mango La Croix for everyone. Ted Cruz puking out by the bus.”

This last is a reference to the ongoing feud between the soon-to-be Rock and Roll Hall of Famer and the junior Senator from Texas. Their animosity first became public in 2018. As Reznor tells it, Cruz tried to get on a concert guest list, and the NIN frontman told him to “fuck off.” Allegedly, Cruz had actually made it onto a guest list once before, whereupon “he drank all the beer and was just a pain in the ass.” As for Cruz, he denied the story, saying that, “NIN is not my musical taste,” though he did admit that he would’ve drank all the beer if given a chance. Well, according to this tote bag, he succeeded, and he ended up doing to the tour bus tires what he’s already done to the country.

Proceeds from the merch will be donated to food banks in the scheduled tour markets, and the tote and wall flag can both be purchased on the band’s website. Reznor plans to spend the rest of his quarantine with a “deep dive into new NIN material.” In March, Nine Inch Nails released two albums, Ghosts V: Together and Ghosts VI: Locusts.

Previous Story
Beyond the Boys’ Club: Maria Brink of In This Moment
Next Story
Indigo Girls on the Opportunity of an Environmental Reset
Popular
More Stories
[fu-upload-form form_layout="media" title="Submit Your Photo"][input type="hidden" name="ugc" value="1"][/fu-upload-form]