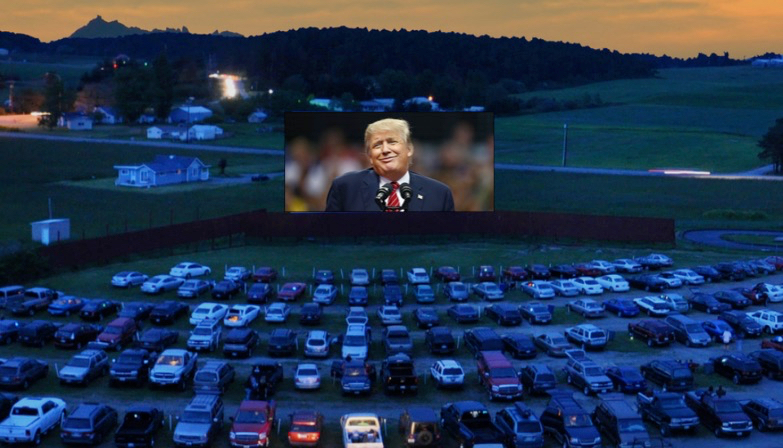 Donald Trump, a man who needs constant adulation in order to exist, hasn’t held a campaign rally since March, and it’s absolutely killing him inside. With large-scale group gatherings still a ways off, his campaign is exploring alternate ways to stage his beloved rallies. According to The Daily Beast, one option under consideration is to hold them at drive-in movie theaters.

The idea of a drive-in campaign rally is “picking up some steam” within Trump’s campaign, and the president will reportedly be presented with an initial round of options as early as next week, The Daily Beast adds.

Now a few things to note: Even if held at a drive-in, there’s nothing to say Trump’s loyal supporters will follow social distancing guidelines and remain in their vehicles. We’ve already seen thousands of his supporters take to the streets, packed on top of one another, protesting state-wide shutdown orders. There’s also a question of logistics and security: the Secret Service would have to go through each vehicle, for sure. And how would merchandise, food, and bathrooms be handled?

Even after that’s all squared away, there’s an availability issue. As The Daily Beast points out, there are 305 operational drive-in theaters in the US, and many are not centrally located. We also know that other companies are looking to stage their own drive-in events: just today Live Nation announced plans to launch drive-in concerts. There’s only so many theaters and so many days to go around.

Lastly, and easily my favorite part of the story, is the question of how to handle protestors. Per The Daily Beast, what happens if an individual attempts to interrupt the event by continually honking their car horn? It’s a lot easier to remove a protester inside of an arena than it is to remove a car parked in a lot.