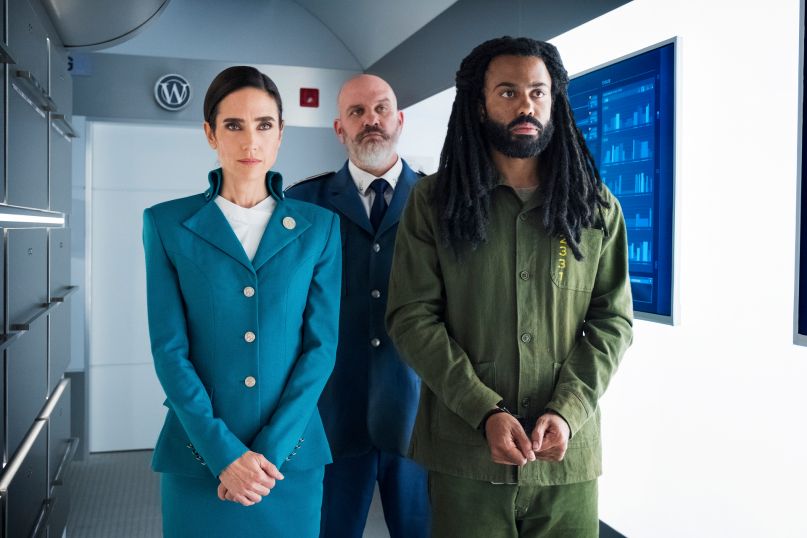 All Aboard: Nearly seven years after scientists accidentally froze the Earth to its core and the last of humanity boarded Mr. Wilford’s 1,001-car ark of a train, the unticketed stowaway class in the vessel’s tail plan insurrection against the higher classes. Their meager rebellion, doomed from the start, mercifully gets cut short when one of its leaders, Andre Layton (Daveed Diggs), a homicide detective in his previous life, gets summoned by Head of Hospitality Melanie Cavill (Jennifer Connelly) to solve a murder towards the front of the train. Not only does working this freezing “cold case” allow Layton the opportunity to gather intelligence and form alliances up-train necessary to the rebellion, but he also stumbles upon a complicated web of secrets and lies woven to keep Wilford’s eternal dream alive.

The Oscar in the Room: Although Netflix streamers long ago learned that Bong Joon-ho knows how to create a dystopian action-thriller within the confines of a self-perpetuating train, the stakes for TNT revisiting Snowpiercer have increased exponentially since the Korean director-writer became the hottest filmmaker on the planet after February’s game-changing triple crown at the Oscars for Best Director, Best Film, and Best Screenplay for Gisaengchung (aka Parasite). Even more fans have since found Bong’s take on Wilford’s eternal train (originally told in an ’80s French graphic novel) and recognize it as a prophetic stepping stone.

Flip that train vertically, and all of a sudden the world looks a lot like that of the Park family living in a gated mansion atop a secluded hill in Parasite while the destitute Kim family fold pizza boxes in a garden unit that floods with sewage during storms. While Bong and the film’s production squad are credited by the TNT series, it’s worth noting that the creative team higher up in the credit scroll — led by Graeme Manson — are now tinkering with a beloved property. It’s an additional pressure to be endured since the team began development several years ago — before production issues and delays began hounding the series.

Murder on the Polar Express: Snowpiercer the film captures a moment of rebellion — a final march, one car at a time, to the payoff of a confrontation with Wilford in the engine room. Not only does a 20-episode (for now) series require different pacing, but the end of the very first episode lets us in on a huge secret that makes a Season 1 ending similar to the movie — at least payoff-wise — impossible (or so we think). Manson’s answer is to turn the early part of the series into an up-train murder mystery, a move that should draw skepticism not only for its genre switch from the film but for the fact that a dead body (even a dickless one) hardly seems shocking when arms are being frozen and shattered via sledgehammer.

Luckily, the writers use “Train Detective” Layton’s case as a clever way of getting a “taily” — someone from the tail section — up-train. While some scenes do show Layton plying his old trade as a homicide sleuth, the murder more interestingly allows the proceedings to move throughout the train, where both Layton and audiences can discover that the delicate balance of Wilford’s ark is far more complicated than front vs. back or haves vs. have-nots. As Layton searches for the murderer in the first several episodes, he’s gaining intelligence, forming alliances, and uncovering train-shattering secrets.

As an audience, we not only get to see how these seeds of rebellion are planted up-train, but also discover the multiple ways in which this train society is fragmented and how curious elements from the film (e.g. sleeper drawers, Kronole, and the tail-end class) came to be. While we ultimately don’t care who killed whom, the murder-case device keeps us on the edge of our tracks for all these other reasons.

First-Class Performances: Credit Daveed Diggs for taking on the Chris Evans role of tail leader. The show would falter quickly if we didn’t like being the Watson to his Holmes early on or didn’t believe his conviction and principles. Katie McGuinness (as fellow taily Josie) delivers a a fitting female counterpart to stand alongside Digg’s Layton while conflicted Brakeman Bess Till (Mickey Sumner), a Wilford lawperson with much to lose, convincingly shows us her humanity as she realizes that something is rotten in Denmark.

But none of it works without Jennifer Connelly’s brilliant turn as the duty-bound Cavill. She’s inherited a whole world to please — or what’s left of one, anyway — and we see both the heights and depths this leads her to. Connelly plays her to perfection, wounded and human one moment (clearly with dire sadness in her past) and ruthlessly and heartlessly pragmatic the next. It’s a fascinating character study of having to step into God’s shoes — but without godlike powers to help maintain order. The strategic and emotional about-faces undertaken by Cavill are as essential to the series as what we come to learn about Layton, and Connelly shines with that weight on her shoulders.

A Penny on the Tracks: Snowpiercer the series will no doubt engage fans of the film, but there are also some minor letdowns and concerns. For instance, the show lacks much of the dark humor of the film, and while it has the runtime to delve into the politics and the social dynamics on Wilford’s train in more subtle ways than Bong’s movie ever could, sometimes it opts to simplify and dumb down the tension between classes. (It’s also worth noting that those who enjoy the more nuanced unfolding in the first several episodes might feel like they’re watching a different series during the bloodier episodes later in the season.) Some of the grander sets do at times sacrifice the suffocating feeling of living in a speeding, narrow world, and some may be disappointed that the series’ final episode exists merely to set the stage for the already ordered second season.

So It Is: Fans of the film will appreciate that Snowpiercer the series slows down and examines so many of the aspects that Bong’s film never had time to explore — all while maintaining the appeal of the original premise. And diehards and newcomers alike will mutually wish the series was “dumped” on a streaming service for the bingeing; the tango between Diggs and Connelly is just that addictive. Now, the question becomes if Snowpiercer has laid enough track for a second season that can be just as thrilling. The final reveal at the end of Season 1 will likely leave viewers skeptical, even if intrigued. Regardless, TNT has promised another 10 episodes aboard the great train. So it is.

Where to See It: The first episode premieres Sunday May 17th on TNT.