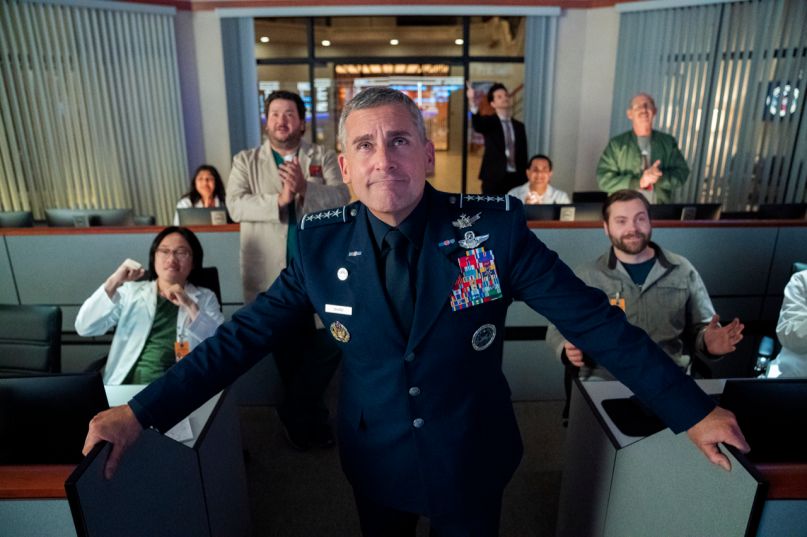 The Pitch: In the Summer of 2018, the U.S. government announced a sixth branch of the armed forces, to be called the “Space Force.” A nation scratched their heads, but President Donald J. Trump tweeted out “Space Force all the way!” to the delight of his neo-conservative base and those who still think the current administration taps into a rich vein of comedy. It played to the tune of 128,000 likes.

In January 2019, Netflix announced a new series based on the venture, to be developed by The Office’s Greg Daniels and Steve Carrell, with the latter starring.

And now, for May 2020, Netflix’s Space Force arrives with a veritable Right Stuff-grade line-up of sitcom stars – Carrell, Lisa Kudrow, Jimmy O. Yang, Ben Schwartz, Jane Lynch, Patrick Warburton, the late Fred Willard, and on and on – with none of the sparks of their previous work. People of Earth, this might be the priciest, most hastily-produced comedy you’ve ever seen. At best, it’s not very funny. At worst, Space Force is a glib comedy about stupidity and wasted resources that itself feels stupid and wasteful.

They computer-animated an ape so that Carrell could make monkey want banana jokes.

The Shite Stuff: The high-concept pitch was all it took for Netflix to believe this would be a successful mission. Carrell as Mark Naird, a hapless general stuck with the unenviable task of steering the Space Force program while interacting with a cast of silly characters? Sounds about right. All you need is a good sense of humor and some funny (and perhaps even likable) characters to keep at it. Daniels knows this. King of the Hill built a working microcosm on the quirks of blue-collar America. His Office eventually got the hang of things with a corporate staff that mainstream audiences grew chummy with. And while a comedy’s first season can often be a testing ground, advanced screening suggests that Space Force has neither the character nor the comedy to continue in any reasonable orbit.

Carrell and Daniels try to reignite the formula they popularized a decade ago, and every casting choice smacks of “Hey remember them from that show?”, but to diminishing returns. They’re all clichés, hollowed out retreads of caricatures they played before. Schwartz plays a millennial PR stooge; Yang, an overconfident scientist; Kudrow takes on a somewhat aloof wife, one who’s painfully underwritten as the series struggles to keep her involved; and John Malkovich, like an outtake from his role in Burn After Reading, grievously rubs his temples in hippie resentment over the proceedings. The jokes are often about people trying to outsmart each other in snotty ways. Women are overachieving know-it-alls (enjoy the Liz Holmes, Nancy Pelosi, and AOC parodies?). Men adopt lab-coats and grunts in perpetual dick-measuring contests. Carrell and crew are the rightest and bestest and sure, they’re not likable but… Huh, come to think of it there’s no one to root for here.

Apparently everyone involved in government, the armed forces, the scientific community, Silicon Valley, the press, the media, and even the janitors that get near this project … are complete imbeciles? “Haha, Space Force, amirite?” is the thesis. That’s it, that’s the premise. There is no more.

Perhaps the appeal is a ship of fools, but Space Force’s crew runs the gamut from tetchy to disingenuous. It’s hard to drum sentiment from people in a show that keeps reminding you they’re also buffoons with little to no redeeming qualities. At least Avenue 5 had the nerve to embrace catastrophe and get inventive, Space Force is built from petty squabbles.

The ideas are tired: People on phones calling Naird a pea-brain. A war game with malfunctioning exoskeletons (reminiscent of paintball episodes on other sitcoms, yet testier). Schwartz talking from both sides of his mouth, resenting another comms person for getting him fired at American Apparel. Carrell’s sexual frustration, drawn out across several episodes. Cafeteria food jokes. Drug jokes. And, of course, the withering specter of a POTUS only impressed by headline-level theatrics. Bad jokes for all mankind.

Sarandos, We Have a Problem: Paretextually, the casting and positioning of Space Force feels like Netflix nervously offering up a replacement to The Office for when that show’s streaming license dries up and hops to Peacock this summer. Carrell himself admitted that the show was the product of Netflix committee-think, after seeing how funny Twitter found Trump’s Space Force rants. In that light, Space Force is cynical in so many ways.

There’s something ironic about a show that jokes about space exploration being a huge waste of money, when Netflix visibly spent hand over fist on lofty sets, costumes, weapons, CG environments, and other big-budget accoutrement in service of a riff on years-old news. Call it Office Over-Budget if you like. Maybe they could have saved moolah by making jokes about Tang.

Space Ace: It takes a special kind of project to make Steve Carrell unfunny. The Oscar and Emmy nominee started as a legendary Second City big-timer. No stroke is too broad, no swing too big. The guy made saying he enjoys a “nice pair of slacks” a classic bit. Space Force, in a bit of a shock, yields something even the nimble Carrell can’t master: an uptight G-man. You’d think Carrell’s knack for pent-up frustration (hello, 40 Year Old Virgin) would make him a lock, but the Naird character feels like a bargain spoof of blow-hard generals like Buck Turgidson (George C. Scott) in Dr. Strangelove. He grumbles, he shouts, he’s given to naïve overconfidence. This is stuff Carrell has mastered before, but Naird lacks any and all of his comedic kindness. There’s no room for play, the Force beats the silly out of him, and he’s stiffly presented as an angry white man. This performance is a rare piece of dead space for Carrell.

The Verdict: Imagine a rocket assembled entirely from shabby, used parts. The boosters, the computers, the heat shields? All of it has seen better days. It’s just familiar pieces, crammed together in the face of an arbitrary, frankly too-soon launch without a real flight plan or a goal beyond making something big and splashy. Actually, think of the Simpsons episode where NASA puts Homer in the cockpit to drum of some PR and hot ink. There’s your damned Space Force. Here’s a comedy for people either desperate for new Office content, or who still find “covfefe” funny.

Where It’s Playing? All 10 episodes hit Netflix on May 29th.